A Map Of America’s Noise Levels

Looking for a little peace and quiet? 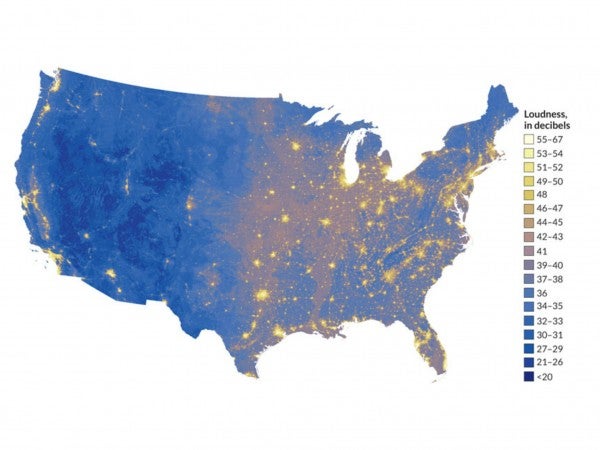 If you’re looking for a quiet getaway, you might take a bit of very old advice and head for the west. This map, showing the quietest places in the contiguous United States, was presented at the annual meeting of the American Association for the Advancement of Science. To some extent, the results aren’t surprising–big cities are definitely more noisy than rural mountainous areas, but it is nice to know that quiet places still exist.

The map was created for the National Park Service’s Natural Sounds and Night Skies Division, which is dedicated to preserving quiet, dark places in national parks. Led by bioacoustics researcher Kurt Fristrup, the team used 1.5 million hours of recordings taken at 600 monitoring sites across the country to to assemble the map the quietest or noisiest areas of the country on a typical summer day.

Even in some of the most remote parks, including Denali in Alaska (not shown in the map above) there was evidence of human noise. “I was surprised by the ubiquity of aircraft noise across all parks,” Fristrup said at the presentation.

If you can’t get out into the wild to hear natural sounds for yourself, the National Park Service has you covered. They have a sound gallery of all kinds of noises, including streams, animals, and the rare geological noise, caused by falling rocks or sand.