But they're still illegal. 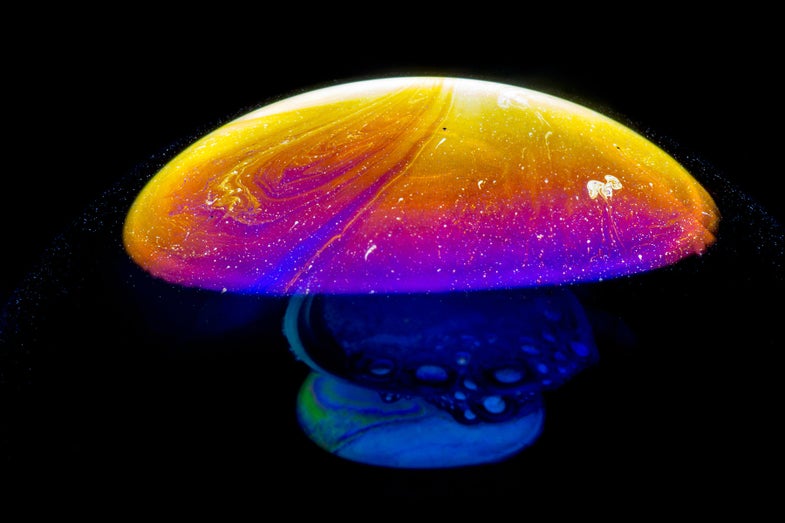 Disclaimer: Popular Science does not endorse the use of illegal drugs.

If you’re looking to play it safe when it comes to illicit substances, look no further than the humble shroom. It’s non-addictive, hard to overdose on, and you can grow it yourself. And, according to a massive report by the Global Drug Survey, it sends the fewest people to the emergency room of any drug on the market. Take that, meth.

Perhaps the most dangerous thing about psychedelic mushrooms is that they’re easily confused for the poisonous kind. There are over 100 varieties of psilocybin-producing shroomies, which is the chemical that makes you trip when you eat them. Some of them are bound to look like toxic varietals, especially if you’re in a hurry to get high. Just as you should never grocery shop while hungry, you should never go mushroom hunting while jonesing for a trip.

Instead, you should befriend a mycologist (a person who studies mushrooms) so that they can help you find the sort of shroom. Most people who don’t buy their mushrooms tend to pick them themselves rather than grow them, which is the riskier—albeit faster—option. The magic varieties grow on every continent, though if you happen to be somewhere subtropical and humid you’ll find more types. A mycologist friend is extra handy in places like Colombia, New Zealand, Norway, Mexico, Brazil, and Scotland, where the Global Drug Survey shows more than a third of shroom consumers pick their own. In Finland, Germany, the Netherlands, and Belgium, people grow far more than they pick.

It’s actually very easy to grow your own magic mushrooms, and it ensures that you’ll never accidentally poison yourself (as long as you keep an eye out for dangerous mushroom mold). Which is not to say that you should grow them, because possession of hallucinogenic mushrooms or sale of spores with the intent of growing psychedelic mushrooms is strictly illegal in the United States. We’re just saying that if you did grow them, it would be safer than trying to pick them in the wild.

Depending on your proximity to EDM venues versus hippie compounds, LSD might be far easier to come by than magic mushrooms. Five times more people need emergency treatment for LSD than they do for shrooms, though that still puts LSD below alcohol, amphetamines, and synthetic cannabis in terms of safety. Of the 10,000 people who reported taking magic mushrooms, only 17 went to the hospital versus 95 on LSD.

More people probably seek treatment because LSD comes in pill form, where you have no real idea of the dosage (or whether it’s spiked with something else, like rat poison) unless you test it yourself. And honestly, who’s testing it themselves? You’re gonna pop the pill, or maybe pop just half the pill if you’re being a little less foolhardy.

LSD also lasts longer and affects way more receptors in your brain than shrooms do. Psychedelic mushrooms only directly affect your serotonin receptors, whereas LSD affects serotonin, dopamine, and a whole host of other stimulating receptors in your brain. Shrooms may have some indirect effect on dopamine levels, but it’s minimal at best. The longer, potentially more intense results from LSD aren’t likely to do actual damage to your brain. But they are likely to give you a bad trip. And really, that’s the main danger with all psychedelics—if you’re anxious before you start or you begin to feel paranoid, the mind-altering impacts from the drugs only amplify those feelings. People who freak out on bad trips can be a danger to themselves and their friends, and that accounts for most of the related hospital visits. If you really overdid it on the pills, you might need medication to calm you down for a while.

Other than that, hallucinogens are pretty safe. They can reduce anxiety, ease the intense pain of cluster headaches, alleviate OCD symptoms, improve depression, and boost the psychological state of terminal cancer patients. A 2006 double-blind study sponsored by the U.S. government found that about 80 percent of people who took psilocybin reported that their well-being improved and remained that way for months after their psychedelic experience (the control group did not). Even over a year later, participants said that it was one of the most meaningful experience of their lives and that they continued to see benefits of it. Even if some of that is just them expecting to see long-lasting results from a psychedelic experience, it’s certainly compelling.

And you can’t even get addicted to them. Magic mushrooms give you short-term tolerance, which means taking more drugs to try to get a better trip won’t help you. Plus a high (pun intended) dose of mushrooms is more likely to make you paranoid than it is to make you feel the music better. If you can figure out the right dose for your body, you can get almost exactly the same high every time. Maybe that’s why the survey found that psychedelic users were among the most responsible drug users and took the most precautions. After all, reproducibility is the key to good science.