Dying is easy, winning is harder. 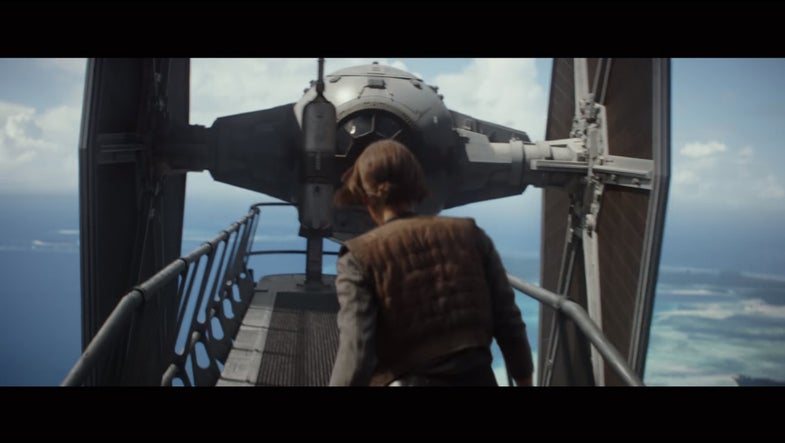 Luke Skywalker is America’s favorite insurgent. The plucky orphan at the heart of Star Wars is thrust into greatness through luck and fate, his own actions forging and defining a new path for the citizens of the Galactic Empire and the Rebel Alliance. Rogue One: A Star Wars Story is not his story. It is the messy prequel, the intricate set-up before the big pay-off.

Who are the rebels that built the alliance before Luke swoops in to save the day? Rogue One, the latest Star Wars story (don’t call it a prequel), places its action immediately before the events of Star Wars: A New Hope. The Galactic Empire, which gestated inside the Old Republic through three deeply underwhelming films set before the original trilogy, is full ascendant. It’s Star Destroyers loom large in space, threatening destruction to all who challenge Palpatine’s totalitarian rule.

It’s an oppressive vision, and the second Rogue One trailer does its best to place the audience in the shadow of that Empire. Rebels meet in secret, a disparate band of thugs, outlaws, and underground strategists, and, well, rogues, all united by the simplest of goals: freedom. The Empire is oppressive by default; the peril at the heart of Rogue One is the centerpiece of Imperial rule. There’s a Death Star in the works, and before the Empire can fall, the rebellion needs to discover and its deadliest weapon.

What will happen on the way? War, lots of asymmetric war. The rebellion may not have the numbers, ships, or armored vehicles available to the Galactic Empire, but they’re getting at least two new pieces of tech. There’s the U-Wing, a new named craft that’s more gunship and transport than fighter. And then there’s what it carries inside, which is something every insurgency needs: angry rebels with fancy space bazookas.

The trailer doesn’t illuminate much more of the plot than previous excerpts from the film, but it grounds it in a deep atmosphere of mistrust. The rebels share a common enemy, but will that be enough to keep them together through new dogfights and beachfront battlefields?

Probably. If there’s any threat good at bringing people together, it’s Darth Vader.

Watch the trailer below, and keep an eye out towards the end.