Waiting for tsunami warning to pass 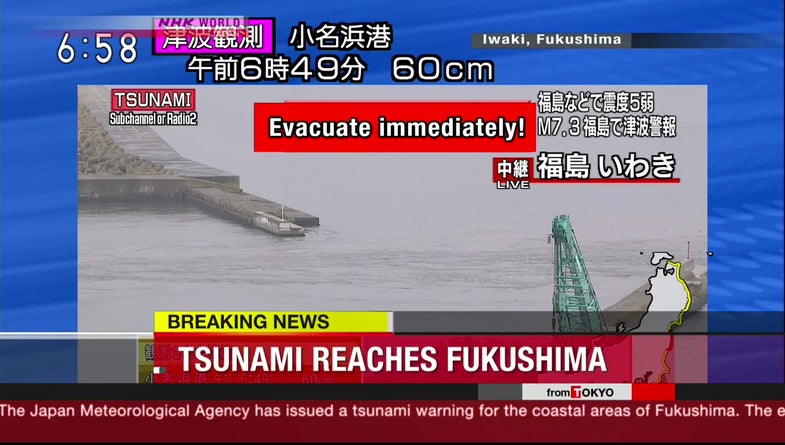 In the early hours of Tuesday morning, a massive earthquake struck Fukushima Prefecture in Japan, near the location of the 2011 earthquake that caused a massive tsunami and critically damaged a nearby power plant, Fukushima Daiichi.

The earthquake on Tuesday was measured by the United States Geological Survey (USGS) as a magnitude 6.9 earthquake. The earthquake was located offshore, and while it caused a large amount of shaking in coastal cities, there were very few reports of damage.

Early reports from Japanese news channel NHK stated that TEPCO, the utility in charge of the Fukushima Daiichi nuclear power plant, said that there were no reports of damage due to the earthquake and that there was no change in radiation levels near the plant. But TEPCO also reported that the water cooling system of the third reactor at a neighboring nuclear power plant – Fukushima Daini – had stopped after the earthquake. That reactor contains spent fuel rods. TEPCO told NHK that there was no immediate danger, and that they were able to restart the cooling system quickly.

The newscasters on NHK repeatedly implored viewers to evacuate immediately to higher ground, saying that individuals should pause only to put on warm clothes and check in on neighbors or those who might need help.

Tsunamis measuring 60 cm (two feet) have been observed in nearby ports, but tsunamis can hit the shore repeatedly, and residents are encouraged to stay at high ground until the the all-clear has been given. Early estimates of the height of the tsunami were as high as 3 meters.

Initial damage estimates from the USGS said that it was very likely that the earthquake itself would have few fatalities and limited economic damage, thanks in large part to the fact that the population in this area of Japan lives in structures that are resistant to damage. Early estimates could change if new variables (like additional aftershocks or tsunamis) arise.