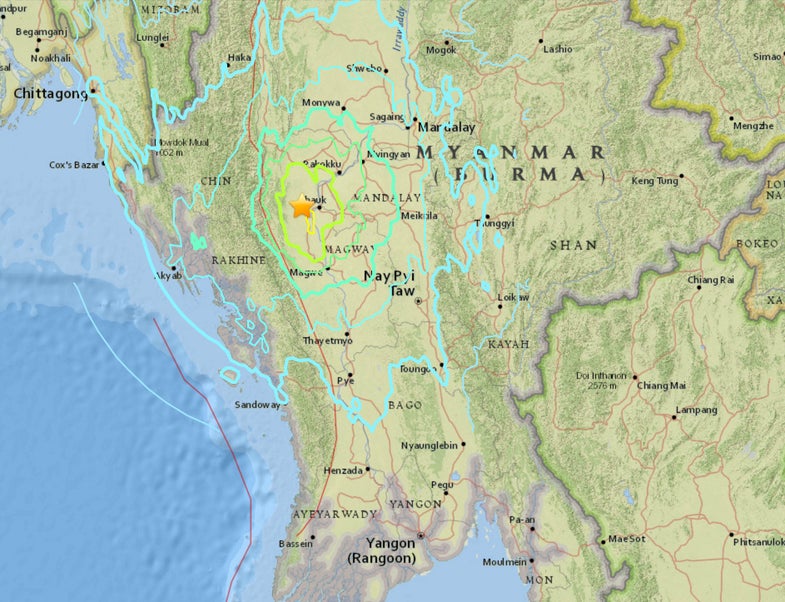 A large earthquake struck Myanmar late in the afternoon on Wednesday, causing damage to historic structures and killing at least one person when a building collapsed. The quake was felt over a wide area in neighboring countries India and Thailand.

Reports are continuing to come in, but initial estimates from the USGS give a very high probability that the death toll from this earthquake will not rise above 100, and that the economic damage will be under $10 million.

The most iconic casualty of the quake appears to be the pagodas and temples in Bagan, a major tourism draw to the country.

The news of this earthquake comes hours after a deadly magnitude 6.2 earthquake struck Italy. There is absolutely no connection between the two earthquakes, but they do offer a study in contrasts.

Though the earthquake in Myanmar was larger than the earthquake in Italy, the damage and death toll appears to be much smaller. There are many factors that play into what makes an earthquake a natural disaster, starting with the most basic: the proximity of the earthquake to population centers. There are towns near the epicenters of both of today’s earthquakes, and both areas contained buildings that were not built to withstand earthquakes.

Depth is important too. While the Myanmar earthquake was stronger, it also happened 52 miles below the Earth’s crust. The Italian earthquake happened just 6 miles inside the Earth. Deeper earthquakes tend to have less intense shaking on the surface than their shallower counterparts.

Another factor is timing. The Myanmar earthquake happened around 5:05 pm local time, when people were awake. The Italian earthquake, in contrast, struck in the early hours of the morning, when almost everyone was asleep. People sleeping inside structures can’t react as quickly to a sudden event like an earthquake as people who are awake and have been awake for hours.

Bottom line? Size matters in an earthquake. But there are a lot of other aspects that matter too.