The magnitude of the situation is still TBD 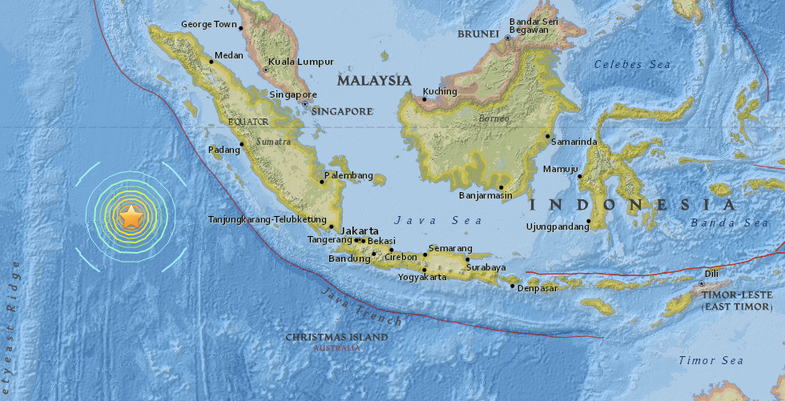 A very large earthquake struck just off the coast of Indonesia today, at 7:49 pm local time.

Luckily, this earthquake in Indonesia did not occur on land, but rather under the waters of the Indian Ocean, 409 miles away from the city of Muara Siberut, Indonesia. Only a few people in Indonesia reported feeling a weak shaking in the area. It also likely helped that this earthquake originated 14.9 miles under the surface of the earth, making shaking at the surface less intense. For comparison, the Nepal earthquake occurred at a depth of five miles.

That’s all good news, but the worry with earthquakes that occur under the oceans is that the seafloor might move in such a way that it generates a tsunami, like the ones that devastated Japan in 2011 and the deadly tsunami that struck in the Indian Ocean in 2004. A tsunami only occurs in very specialized circumstances, when water is displaced. That can happen in an earthquake if the seafloor suddenly rises or falls, or in an underwater volcanic eruption or landslide, when the seafloor shifts dramatically in a short amount of time.

Luckily, that worst-case-scenario doesn’t appear to be happening either. NOAA’s Tsunami Watch Center has not issued any warnings, watches or advisories. The Australian Bureau of Meteorology has issued a marine warning after detecting a tsunami of 0.05 meters (0.16 feet) at a sea gauge, but is not asking people to evacuate, just to stay out of the water and away from the beach or marinas on Christmas and Cocos Islands. Indonesia issued a tsunami warning briefly, but India and Sri Lanka did not, deciding that there wasn’t enough of a threat to warrant a warning.

Currently, the USGS’s PAGER program is predicting both a minimal loss of life and minimal economic loss in this event.