On a trip to Provence, this Jag drives like a fine wine 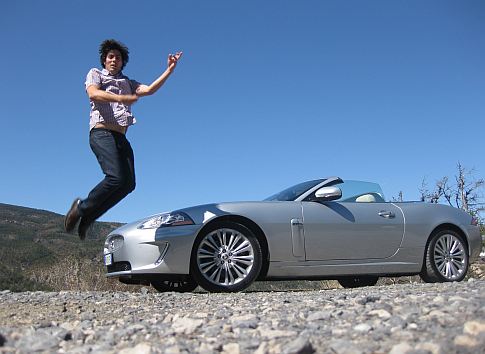 It’s difficult to dispute the notion that in winemaking, handcrafted artisanal production tends to yield a finer, more complex wine. Similarly, when one gets behind the wheel of the 2010 Jaguar XKR, the craftsmanship and care are more than apparent.

I invoke the wine analogy because I was fortunate enough to be flown to the South of France to test-drive the new 510-horsepower supercharged 5.0-liter V8 Jaguar XKR.

As I careen this aluminum-bodied beauty through the twists and turns of Provence’s bucolic countryside — with dormant grape vines, awaiting spring’s arrival, passing in a blur — I can’t help but compare the car to some of the small-batch, terroir-focused wines of the region (Domaine Tempier, which makes a celebrated rosé, lies just to the southwest of our drive route). In 2008, for example, Jaguar produced only 73,047 vehicles globally, 14,824 of which were sold in the U.S. — significantly fewer than its competitors, giving the driver the sense that he or she is behind the wheel of something rare and truly unique.

What makes the 2010 two-door XKR coupe and convertible so special is the feeling of pure, elegant refinement blended with uncompromising power. The new XKR has several marked improvements over its 2009 predecessor, most notably a decrease in 0-to-60 time from 4.9 to 4.6 seconds while maintaining the same fuel economy as last year’s model. With maximum torque from 2500 to 5500 rpm, it’s surely a more powerful car than any sane person requires; but this is a winding country road in Southern France, where I’m certain different notions of sanity apply.

Along a rare straightaway, we floor the throttle. The engine literally roars like its namesake feline, as the backs of our heads get sucked into the luxurious leather headrests, the paddle flip shifters providing instantly crisp response without any detectible stutter.

In a word: magnifique. 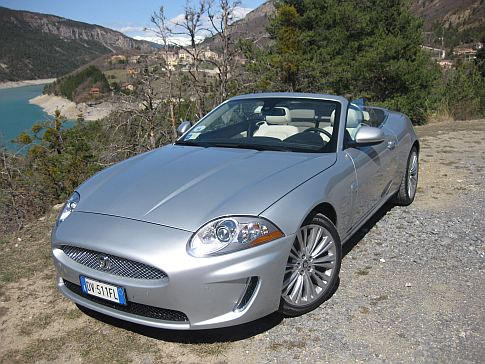 For me, as a part-time musician, the other highlight of the new line of Jaguars is the custom Bowers & Wilkins stereo — arguably the finest factory-installed automotive sound system around.

B&W, who most notably manufactures speakers for legendary Abbey Road and Skywalker Sound studios, partnered with Jaguar exclusively to design this audiophile’s dream.

I put the stereo to the test using the music of Serge Gainsbourg, his close-mic’d sultry baritone whispers seeming the only appropriate soundtrack for the lush French countryside. Even while driving over 90 mph with the top down (narrowly averting what would surely be an expensive encounter with the provincial police), the stereo delivers perfect clarity and punch, due in part to the XKR’s remarkable airflow management system design.

We hear everything, and our hair stays perfectly coiffed!

My only cavil with the XKR was in its dashboard computer display, the graphics of which lacked sophistication worthy of the rest of the car, and instead resembled something from the early 80’s film Tron.

Nonetheless, perhaps, like me, you just have a natural affinity for Jaguar as a brand. Mine probably began after I first saw Bud Cort transform his gorgeous Jag (which some trivia buffs suggest was an XKE Series 2 Roadster) into a hearse in the 1971 film Harold and Maude. Regardless, the Jaguar XKR convertible is a dream car crafted like a delicate French wine — with an attention to detail that nearly justifies its $102,000 MSRP.