Will tank cars ever get safer? 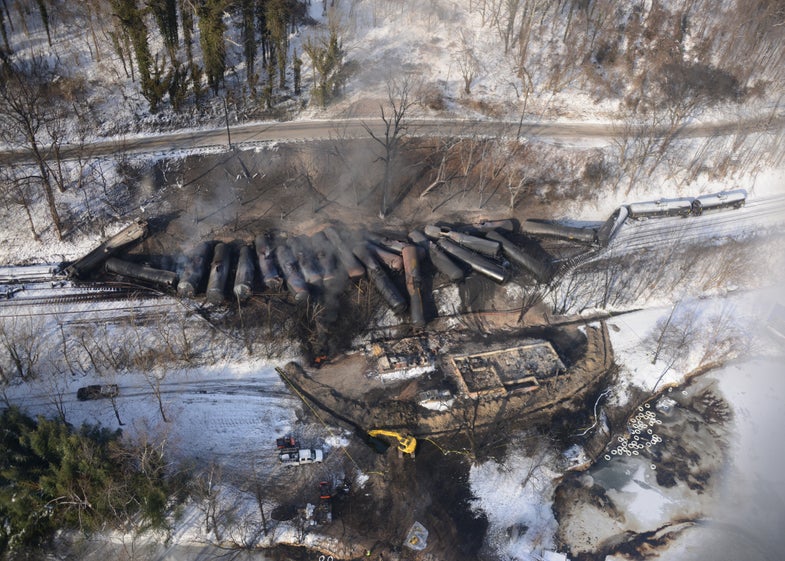 Response crews for the West Virginia train derailment continue to monitor the burning of the derailed rail cars near Mount Carbon next to the Kanawha River, Feb. 18, 2015. The West Virginia Train Derailment Unified Command continues to work with federal, state and local agencies on the response efforts for the train derailment that occurred near Mount Carbon, Feb. 15, 2015. (U.S. Coast Guard photo by Chief Petty Officer Angie Vallier).
SHARE

On Monday, 27 tanker cars carrying oil from North Dakota derailed in West Virginia. The train had 109 cars and was carrying 3 million gallons of crude oil. Nineteen of the cars, each capable of holding thousands of gallons of crude, caught fire, and despite freezing weather and snow, several small fires were still blazing on Thursday, days after the crash, with emergency responders deciding to let the flames burn themselves out.

One person suffered minor injuries, but two towns were evacuated, and, because the crash occurred by a river, water supplies were cut off downstream of the crash.

“This accident is another reminder of the need to improve the safety of transporting hazardous materials by rail,” Christopher Hart, Acting Chairman of the National Transportation Safety Board (NTSB) said in a statement.

It’s no secret that oil production in the United States increased dramatically over the past 5 to 10 years, from conventional wells and shale drilling in places that aren’t connected to pipelines. So how does the oil get to depots, like the one in Yorktown, Virginia, where this particular shipment was headed? By rail. The NTSB estimates that in 2009, about 10,000 tank cars carried crude oil. In 2013, that number soared to 290,000.

With the increase in tank cars on the railways, there are also increased numbers of accidents, including a horrific collision in Quebec in 2013, when 47 people died and part of the town of Lac-Mégantic was leveled by an explosion. In the short time that has passed since that incident, there have been other derailments in the United States and Canada leading to calls for better, safer tank cars.

The NTSB lists improving rail tank car safety as one of its top priorities, citing devastating crashes of an older model of tank car, the DOT-111. The DOT-111 is, according to the NTSB the most common tank car in use on the railroads, and they are in use constantly.

The tank cars involved in Monday’s crash were already a newer model, the 1232, which was supposed to be much safer than the old DOT-111, with thicker sides and other safety features that were supposed to reduce the chance of explosions like this one.

“It doesn’t appear that this threat is being taken seriously,” environmental lawyer Patrick McGinley told the Pittsburgh Post-Gazette . “This might be a situation where legislation is needed rather than leaving the issue to an administrative agency to go through this long rule-making process.”

The Department of Transportation proposed rules for improving tank car safety, but has said that a final decision on the ruling won’t be expected until May 2015.