Toss around some steel. 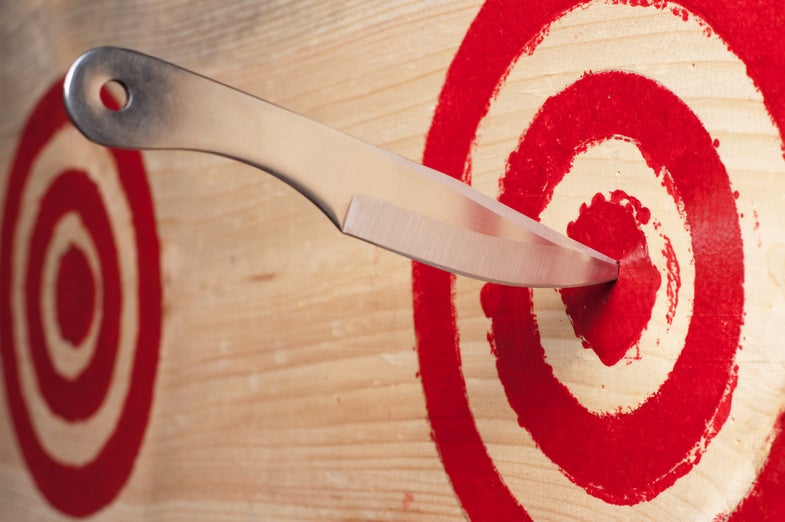 When you picture a sporty hobby, your mind probably doesn’t jump to knife throwing. This practice is more likely to conjure up images of circus performers or old-timey Wild West shows. But that could be changing.

“Knife throwing as a sport has grown exponentially in popularity in the last 10 years,” says performer and professional knife thrower Caleb McEwen. It used to be difficult to find information about weird sports and unusual hobbies, he explains. But the internet gives us access to information on the most arcane subjects. On YouTube, anyone can watch artists like McEwen and his three-man act, The Danger Committee, which has appeared on television shows such as America’s Got Talent.

Despite the seeming danger, hurling blades through the air could appeal to anyone. “At first, people say throwing knives sounds crazy and dangerous, and it actually scares them,” says McEwen. “But if I have them do it a few times, they say ‘this is great!’ Then they want to know where to get knives and how to build a target.”

That’s pretty much what happened to me. I like the feel of the 14-inch-long carbon-steel knife in my hand. I enjoy squaring up to the wooden target, taking a breath, extending my arm sharply, and letting the blade fly. Off it goes, turning exactly one and a half times on its way toward the red circle in the center. Then, with a solid thunk, it sticks. 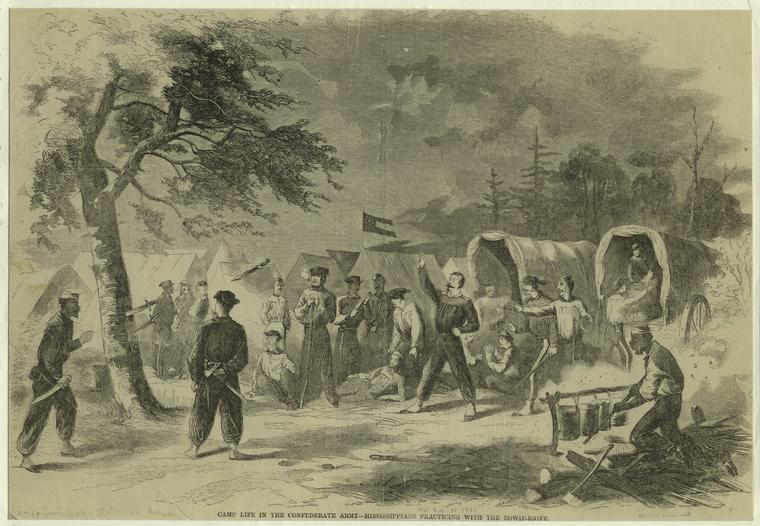 An illustration from an 1861 issue of Harper’s Weekly, called “Camp Life In The Confederate Army – Mississippians Practicing With The Bowie-Knife.”

In the old days, those who hurled steel usually did so out of boredom. Instead of investing in purpose-built projectiles, they used whatever was to hand, such as kitchen or hunting knives. 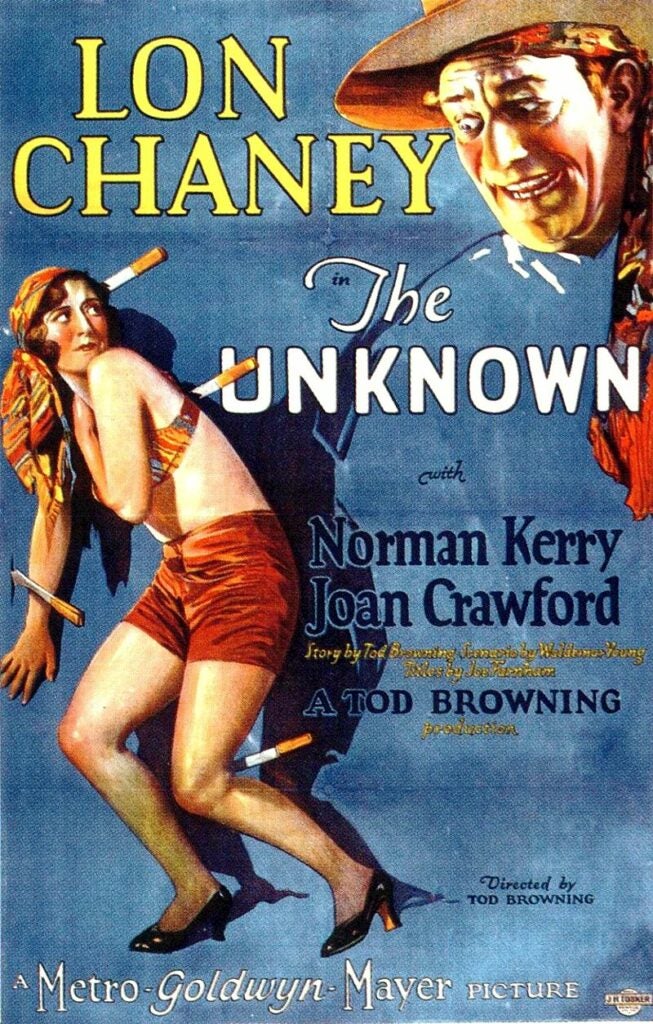 In this 1927 film, carnival performer Alonzo the Armless (Lon Chaney) has an act that consists of throwing blades at his beautiful assistant Nanon (Joan Crawford) with his feet. Nanon falls for side show strongman Malabar, and as you might expect, this does not please Alonzo. That’s when the knives really come out.

Perhaps the first blade to actually work well while airborne was the famous Bowie knife, reportedly invented by fighter and frontiersman Jim Bowie and his brother Rezin. This long-bladed, all-purpose knife has a solid hilt and handle guard, and if you take the time to practice with it, it flies through the air pretty well. Contemporary images from the Civil War show troops tossing Bowie knives at targets for sport.

However, around the turn of the 19th century, knife throwers acquired a sinister image. Maybe, the popular culture of that time suggested, people who are good at sending sharp objects hurtling into targets might be, well, a little off. Hollywood immortalized this bad reputation by casting steel throwers as villains in movies like The Unknown (1927), Mad Love (1935), Santa Sangre (1989), and Gangs of New York (2002).

But here’s the thing: This bad rap is unearned. When I throw knives, I don’t put anyone in danger, but I do find it exhilarating. This hobby appeals less to my dark side—and more to my interest in physics.

The science of throwing

Like darts, the goal in knife throwing is to hit a target. However, knives do not travel through the air point first, maintaining an arrow-like trajectory. Instead, for the vast majority of throwers, the physics involved includes both lateral movement and rotation as the knife circles around its center of gravity on the way to the target.

On top of that, you need to carefully choose the distance between the release point and the target face. The right length will result in a stick, so you need to throw from that point each time.

How do you find that distance? The math involved is simple: If the thrower holds the knife by the handle, it needs room to make one complete revolution (or an exact multiple of that length). If held by the blade, the knife must complete a half rotation, one and half rotations, and so on. 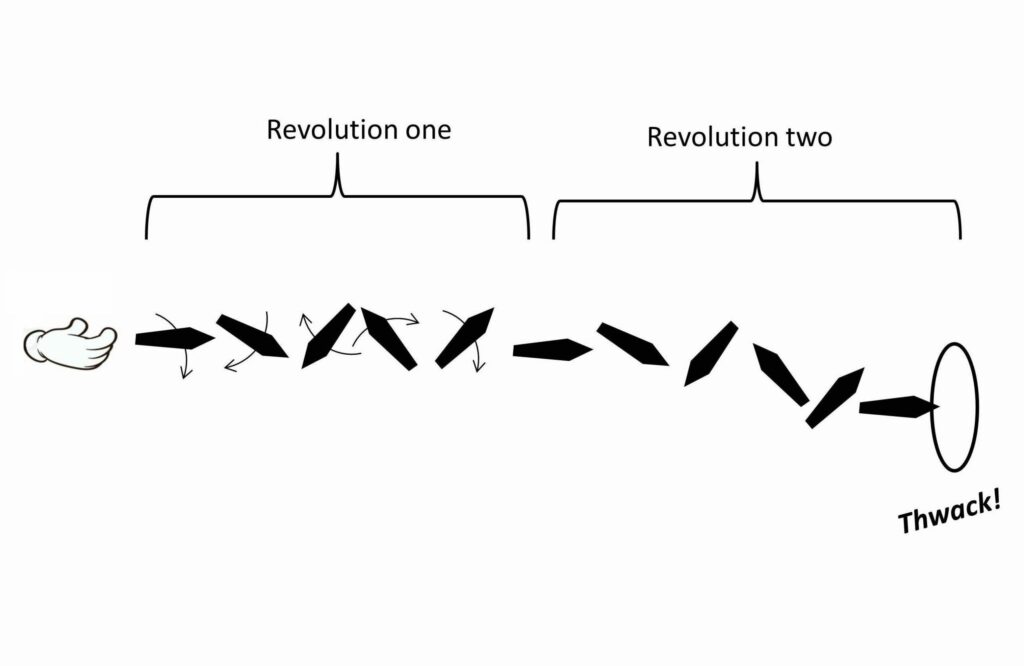 The knife rotates as it flies through the air.

If you want to delve deeper, then the physics and human kinesiology behind the act become a tad more involved. It starts with the arm-shoulder movement of the thrower, which traces out a circular path around the shoulder joint. During this act, while the knife is in the thrower’s hand, the knife’s main axis continually changes the angle it makes with the ground; much like the second hand of a watch (only much faster). Physicists call this constantly-changing angle, as measured per unit of time, angular velocity.

Once the knife leaves the thrower’s hand, it moves forward through the air while continuing to rotate around its center of gravity. On a typical a throwing tool, the center of gravity sits halfway between the end of the handle and the blade tip. Both ends of a balanced knife will trace out equal circles as it flies through the air. If the knife is unbalanced—that is, the center of gravity is located closer to one end or the other—then the trajectory will be less predictable, which makes it harder (but not impossible) to throw accurately.

As the knife flies, its angular velocity neither speeds up nor slows down. Instead, the blade simply continues to rotate around its center of gravity at a constant speed until it hits whatever it was thrown at. If the knife point is aiming forward at the moment of target impact, the blade sticks in the target. Otherwise, it bounces off.

With this scientific foundation, it’s easy to see that once a thrower learns to throw consistently at one distance, he or she can move forward or backward at discrete, one-revolution distances and still make the knife stick.

As in golf, tennis, and bicycling, the equipment makes a tremendous difference. At the moment of impact, if the knife’s sharp tip faces forward, you get that satisfying thunk. But if the handle or side hits the target, the knife bounces back and falls to the ground with a sad thud. To maximize thunks and minimize thuds, you need a well-balanced weapon with a durable, edge-holding tip, as well as a specially constructed target.

A purpose-built throwing knife typically measures between 12 and 15 inches long and weighs between 12 and 20 ounces. (Shorter, lighter knives are difficult to grip and don’t have enough mass to stick easily; longer, heavier knives require more muscle power than most people can easily muster.) Its particular length, weight, and balance allow you to throw it consistently and accurately.

This means it’s important to choose a good throwing knife of the correct size and weight. You might start with a medium-size, purpose-made throwing knife from a reputable company. I like the Cold Steel Pro Balance Thrower, which costs $35. Good-quality throwing knives are forged from heat-treated alloy steel, and they can last a lifetime.

To improve your odds of landing shots, you should take care when creating the target. I recommend that you build one from a soft wood like pine, with the grain running vertically to permit easier sticking. Don’t use a tree—repeated knife wounds can kill it.

Instead, you might lay ¾-inch-thick planks side by side, mount them on a large 4- by 8-foot sheet of plywood, and then mark your target with five concentric circles. You can also try a more involved method. Once you have it, many experienced throwers leave their targets out in the rain—they say the soaking softens the wood and provides a better stick.

Speaking of targets, their placement is very important. Find an open area where you can see at least 30 feet in all directions, or set your target against a long continuous wall with no doors and windows. Then secure the area to keep people or pets from accidentally getting in the way of a flying knife.

Since missing the target will cause your knife to hit the ground, a hard surface will be hard on your knife. Instead, throw on grass, and keep the growth short. That way, if the knife falls and buries itself in the dirt, you’ll be able to find it easily.

How to get started

As a skill, knife throwing is not particularly difficult to learn, although attaining any real degree of competence requires a fair amount of practice. As the late Harry K. McEvoy wrote in Knife Throwing: A Practical Guide, if newcomers have enough coordination to pitch a baseball or crack a whip, they can learn to throw a knife correctly.

Here’s a basic outline of the steps.

Remember, the key is to be very consistent. The knife thrower must release the blade in exactly the same way and at exactly the same position every time. Once you determine the distance (between the release point and the target face) that results in a stick, make sure to toss from that distance each time.

Watching a few videos produced by experts can help. For example, check out this guide by YouTuber shaykai (we linked to a couple of his other videos earlier in this story).

Although this technique is helpful, you can adjust it to suit your own style. There’s no hard and fast method, and there’s just one rule: Be safe. Here are a few tips to protect yourself and others.

Becoming a proficient thrower takes many hours of practice—and I haven’t mastered it yet. Too many of my throws still miss the bullseye or worse, fall to the ground. But the red-blooded flush of satisfaction from those throws that do stick in the center more than make up for the ones that don’t.