Around our house, when two people are looking at the same thing, it’s usually a cute baby. Joint attention happens... 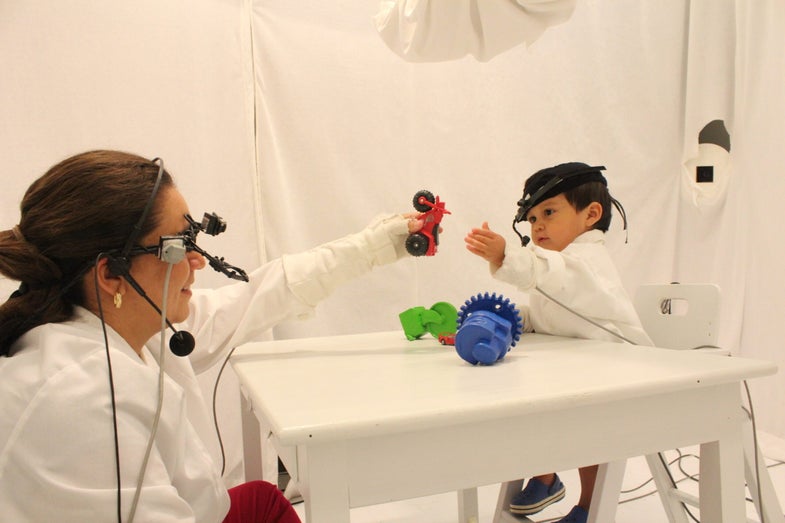 Wearing head-mounted eye-tracking technology, a child and his mother engage in free play with objects for researchers to observe the dynamics of their social interaction.
SHARE

Around our house, when two people are looking at the same thing, it’s usually a cute baby. Joint attention happens when two people are focused on the same object, and babies start to understand it very early on. Great apes, horses, and dogs (why yes, that’s my food dish. I see we’re both looking at it!) also have mastered the art of joint attention.

While previous studies examined eye gaze between babies and their parents, new research has pinpointed an important aspect of this mind meld: the hands.

Researchers at Indiana University used a Google-Glass-like device that gave them ability to see both a person’s wider view as well as exactly where a person fixates on moment by moment. Chen Yu, lead author of the study published recently in PLoS One, says that this technology a more precise measure of visual attention than video that shows only where a person is looking. This type of tracking had never been used before in small children. Over the course of a few years, the team looked at more than 100 pairs of caregiver and one-year-old kids while they were playing.

When they combed through the digital data, they found that children follow the lead of a parent’s hands more often than facial cues. The babies and parents both led and followed each other’s attention as equal participants.

Yu points to times that hands are involved in working with a baby: on the changing table, at mealtimes, and playing with toys. He says that joint attention through hand following is faster than gaze following, because we don’t need to look up to one’s face and then estimate where the person is looking, and then switch attention toward the direction he is looking. In addition, hand following is more precise. “With hand holding, as soon as hands make contact with an object, it is very clear what you are attending to — even with a scene cluttered with many objects.”

Other studies have shown that joint attention can predict cognitive and language development, so Yu says it’s important for parents to pay attention to what they hold and what the baby holds.