Whether flaky or syrupy, your earwax has helpful health benefits. So stop picking it out of your ears. 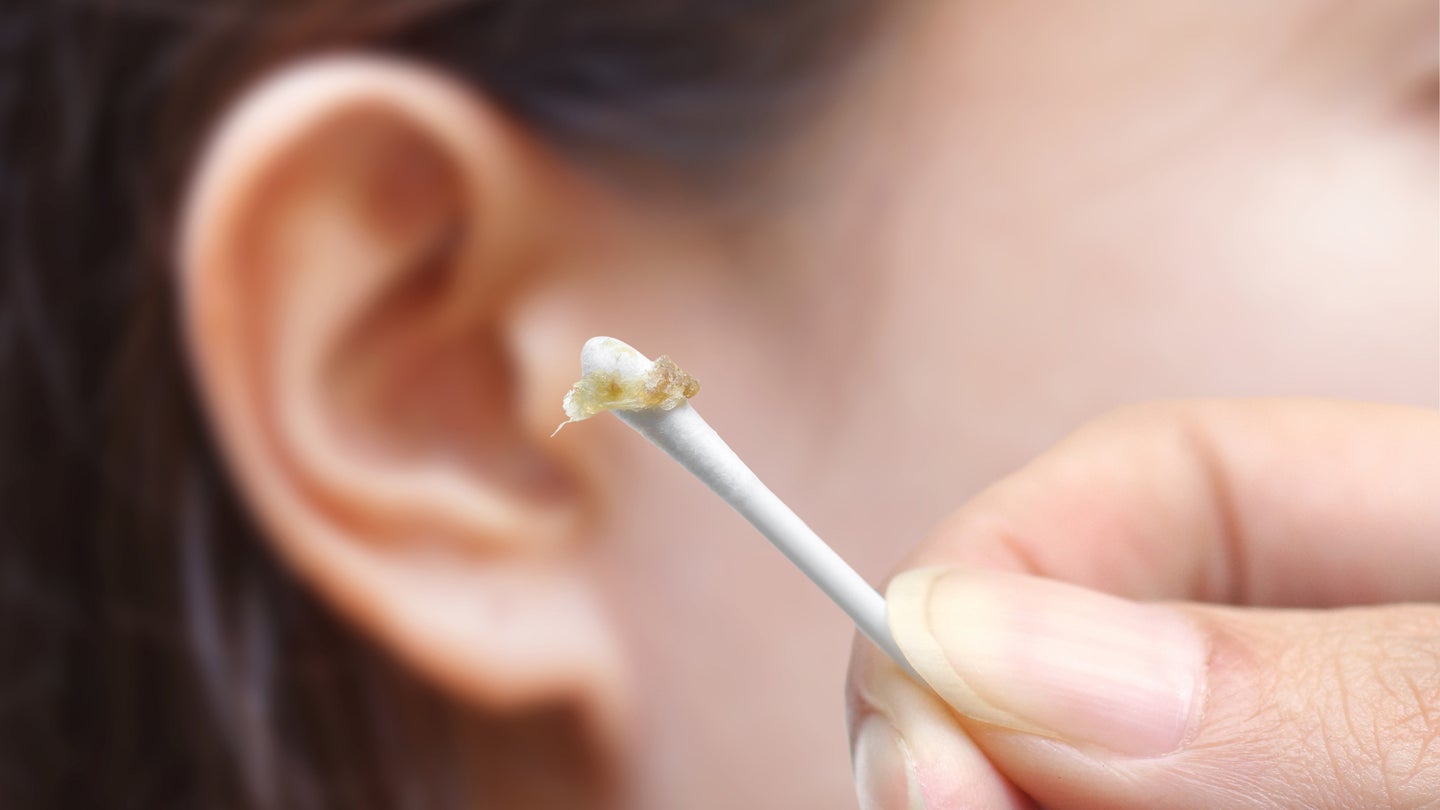 So many of us enjoy picking out our earwax. But the stuff is best left alone. Deposit Photos
SHARE

As a child, I loved it when my mom cleaned my earwax. It was a regular ritual: I would lay my head in her lap as she shined a flashlight down my tiny ear canal. Very gently, she scraped and scooped my goopy earwax with the curved end of a thin bamboo stick decorated with a cute little doll, called a mimikaki in Japanese. For thousands of years, ear cleaning in many Asian cultures has been an act of affection. But this intense fascination with ridding our ear holes of the stuff is pretty universal: The ancient Romans created specialized ear tweezers, medieval Europeans made metal spoons, and the Vikings cleaned their ears with picks of gold.

“All cultures seem to be obsessed with removing earwax,” says Henry Ou, a pediatric otolaryngologist at Seattle Children’s Hospital and the University of Washington.

Despite all of our creative removal efforts, earwax coats the canal for a reason—and it’s best if you leave it be, Ou says. Even though it might clog your earphones or stain your pillows (I can relate), earwax is a significant and necessary substance. Whether crusty or creamy, you should appreciate this bodily secretion—the contents of which is unique to you—for keeping our ears healthy and clean.

What exactly is earwax?

Earwax, scientifically referred to as “cerumen,” is a concoction of three main ingredients: oils, sweat, and dead skin cells. “What percentage of each varies depending on the person,” says Ou. “Everyone’s composition is slightly different.”

The skin in your ear grows constantly, he explains. When dead skin cells shed, they migrate from inside to the outer ear, which is helped by two earwax components: Sweat and oil. The sweat, which may contribute to earwax aroma, is secreted from specific organs called apocrine glands, also found in the groin, armpits, and nipples.

[Related: It’s never too early to start protecting your hearing]

The oily discharge comes from sebaceous glands around the hair follicles in the outer canal. How much oil your glands produce plays a role in the viscosity and texture of the golden globs, says Yu-lan Mary Ying, an otolaryngologist and associate professor at Rutgers New Jersey School of Medicine.

“When we have different oil content, we all make different consistency and that’s very individualized,” she says. Some people may have more oil glands than others, or have glands that are more productive. The difference in oil might explain where there’s a great diversity of wax types, “from very dry, flaky to very thick, kind of like candle wax or butter,” says Ying.

What role do your genes play?

While earwax consistency runs the gamut from flaky to syrupy, people typically fall into two camps: wet or dry earwax. Dry earwax tends to be lighter shades of yellow or even gray, whereas wetter earwax is often darker gold or brown. Wet earwax may have a stronger odor.

These distinct characteristics of earwax types are rooted in your genetics. Wet earwax is common in populations such as those of European and African descent, while dry earwax is more prevalent in East Asians. That makes me an outlier. I’ve always struggled with sticky, gooey wet earwax that always seems to get on everything—earbuds, pillowcases, beanie caps. A 2006 Nature Genetics study identified that the gene ABCC11 was responsible for what earwax type we have, and found that wet earwax was the more dominant trait than dry.

[Related: How to clean AirPods and other headphones]

While scientists have tried to identify which type of earwax has superior health or evolutionary benefits, Ou says he’s not entirely convinced by current research. Although, he adds, your environment may influence it: A 2011 study showed some associations with earwax type and climates—wet being more common in warmer areas, while dry was favored in cooler climates.

Does your earwax ever change?

Not really. It might seem like kids produce a lot more earwax, but it’s actually because they have little ear canals. “It won’t take much to block it,” says Ou. “Because the canal is smaller, it’s harder for the wax to get out on its own.”

It’s possible for more subtle changes in earwax, though, as you get older, Ying explains. Sweat and oil glands become less productive as we age, and skin generally becomes drier. It might also cause earwax to become dry and flaky.

The ears, nose, and throat share the same space, which means an infection from a virus or bacteria could impact all of them at the same time. Some have believed that your ears produce more earwax when you’re sick, but there’s little evidence to support this. A cold, flu, or allergies might make your ears feel plugged, but that’s likely from fluid buildup caused by swollen tubes linking your ears and throat, explains Ying. “When you have nasal congestion from tonsillitis or major inflammation from a sore throat, the [tubes] can be blocked, so your ears feel full,” she says.

Most infections won’t alter your earwax. But there are more severe cases, like a ruptured eardrum, swimmer’s ear, or serious head injury, where the consistency can change into a liquidy pus—sometimes referred to as “runny ears.” As secretions and drainage leak from an infected middle ear, it can mix with the wax, Ou says.

Ear, nose, and throat doctors may collect the drainage-wax mixture to culture it and see whether it contains fungi or bacteria. This helps guide antibiotic or antifungal treatments. Some research groups have explored using earwax as a tool in toxicology, such as detecting drug use, in the same way hair or urine might be analyzed.Others have looked into earwax to measure hormone levels such as cortisol.

Why is earwax important?

Regardless of the texture or type you have, earwax serves as a line of defense in the external ear canal. Studies have shown that the substance contains antibacterial and antifungal proteins, which can prevent infections. It also creates a slightly acidic environment that harmful microbes dislike. Importantly, the viscous material keeps the inside of your ear nice and moist.

“It serves as a protective, natural lubricant,” says Ying. “Think of skin on the rest of your body. You have to have a natural production of oil to prevent you from being so dry.”

Your ears are no different. Without that lubrication, your ears would feel itchy, tempting you into scratching, which risks irritating or breaking the delicate skin that lines your canal. A tiny nick to this natural barrier can allow in bacteria and cause swimmer’s ear or other infections. Even worse, if you poke too deep, you might end up puncturing your eardrums. Plus, earwax also helps capture dust, debris, and other things that might fall into your canal.

[Related: For the love of God, please stop sticking things into your ear]

This all said, while you really shouldn’t pick at your earwax, sometimes clinicians do need to remove it. Too much of it can affect hearing; for instance, tinnitus, a constant ringing in the ear, can be due to excessive earwax, explains Ou. People who wear hearing aids or hearing assistive devices are more prone to earwax buildup and have to be on top of wax removal appointments to avoid severe impactions or additional hearing loss. “If we need to see your eardrum and we can’t see it because earwax is in the way, then we’ll use tools to carefully clear it,” he says. “But there’s really not a lot of reasons.”

Sticking things in your ear on your own, particularly those prized cotton swabs, winds up pushing more wax deeper inside the ear than whatever you take out. This could cause even worse buildups. Instead, over-the-counter mineral oils or saline drops can help soften the wax and it’ll clear out on its own, says Ou. If that doesn’t work, seek medical attention.

“If your ears are really full, you shouldn’t even try using Q-tips, you shouldn’t do anything,” Ying says. “Just make an appointment and let us take a look.”