See progress (or decay) on the march, right on your computer screen. 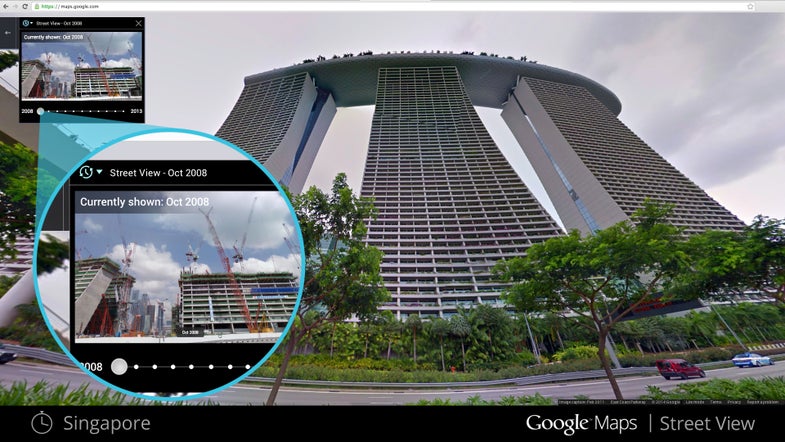 Even as Google continues expanding its Maps—going as far as documenting polar bear migrations—the company has to regularly dispatch their Street View cars to places they’ve already been: cities change, and it takes another lap to keep Maps up to date. That means major metropolises—Singapore, New York—have been updated as much as eight or nine times since Google’s tool first launched. Now, you can finally take a look at all those past snapshots.

Starting this morning, when you check out Google Maps, you’ll see an inconspicuous clock in the corner of your screen: click it, and you’ll be able to toggle between past versions of Maps, then watch the results of urban gentrification or economic collapse, natural disasters or fiscal fortune, unfurl before your eyes. (Fun fun fun!)

The project is a different way of instantly looking at a city or town’s evolution: it’s one thing to hear about the rise of the Williamsburg waterfront or Freedom Tower, or read about the havoc of a post-Sandy New Jersey, but it’s another to see an instant, on-demand before-and-after.

Although that won’t necessarily be an option uniformly available to everyone. Street View, as seamless as it feels, consists of snapshots; a van takes a 360-degree photo every so many feet. Vinay Shet, Google Street View product manager, told me that adding snapshots of what each location looked like in the past required doubling the total amount of photo stills stored on Maps—a huge overhaul. But for every area with seven snapshots, there are many more remote spots where Google’s vans have only made one sweep. If you’re looking to relive the construction of your personal shed in the Alaskan wilderness, you’re probably out of luck.

Then again, even for urbanites, the time-tourism in foreign locales looks like the best part. (There’s even a Doc Brown that stands in for the Street View peg-limbed dude.) Here’s a look, in GIF form.