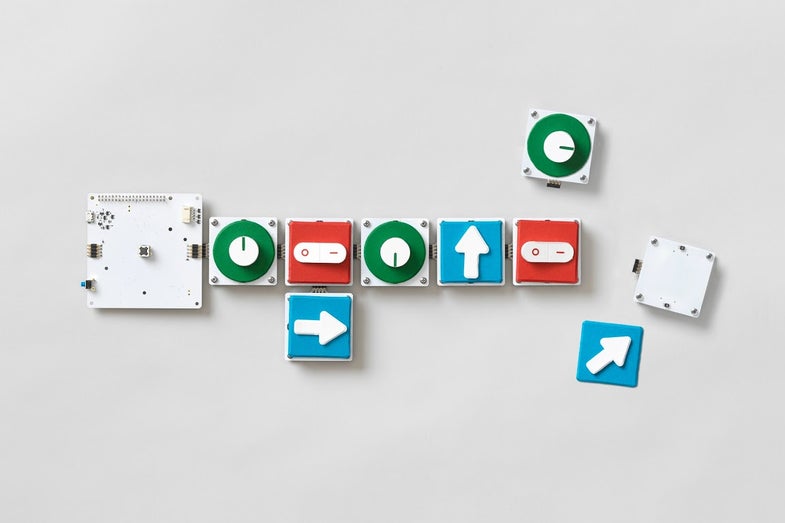 By making code physical, Google hopes the concept will be easier for kids to understand. Representing a bit of code, each block can be snapped together to make a sequence that can be sent over Bluetooth or Wi-Fi to play music, start a toy, or any number of other things. Google
SHARE

While some think that code will soon be a thing of the past, we’ll still need software engineers for a long time to come. And in a coming era where the computer is even more relevant than it is today, it’s important that the next generation understand how it all works.

To start education about programming early, Google has designed a system for teaching kids to play with code, called Project Bloks. The system simplifies lines of code into physical blocks. String a few blocks in a row, hit the big “Go” button, and the code is transmitted over Bluetooth or Wi-Fi to control toy robots, or make music.

“In a nutshell, this is about making code physical for kids,” says Jayme Goldstein, team lead for Project Bloks.

The system has three main parts: that big “Go” button sits on top of a Raspberry Pi Zero, which acts as the brains of the operation. The whole string of blocks feeds into a master block, called the Brain Board. Then there are pucks, which represent the individual elements of the code. Switches on the pucks vary the code.

One puck could have a knob that commands the robot to turn, or raises the volume of a musical note. Another could be used to repeat a previous command. The pucks are placed on top of base blocks, which are simply used to string the pucks together.

Google says that Project Bloks will be able to control any toy or device with an open API.

The initiative will be completely open source. Google has devised this technique, but hopes developers will be able to monetize it for themselves and make physical hardware a reality.

Google partnered with Stanford University and design firm Ideo to create Project Bloks, and the next step is to publish the designs for the system.