The street-legal conversion nears 200 mph – and could go faster 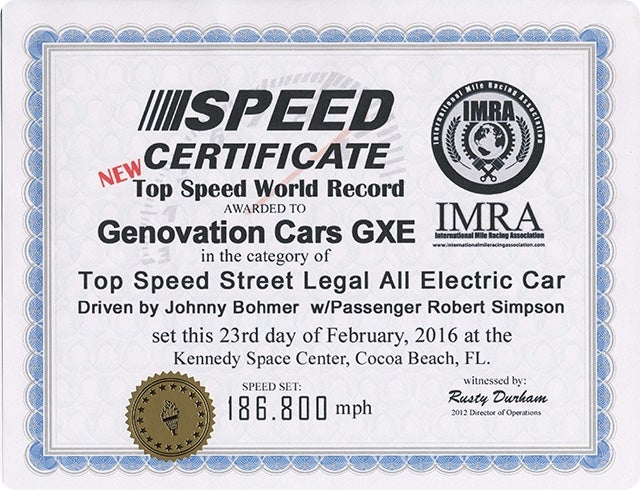 On February 23, 2016, Genovation Cars made some noise (figuratively, not literally) when its GXE, an all-electric 2006 Corvette Z06 conversion, set a new record for fastest street-legal electric car at 186.8 mph. Johnny Bohmer, who has several speed records to his name, was at the wheel, which makes perfect sense. The record was set at the Johnny Bohmer Proving Grounds/Shuttle Landing Facility in Cocoa Beach, Florida.

It may seem excessive for an electric car to use a shuttle landing strip, but it’s one of the few places with enough runway—3 miles, to be exact—to attempt high-speed records. The International Mile Racing Association, which certified Genovation’s record, measures the vehicle’s speed at 5280 feet from a standing start. That leaves two miles to slow down, so contenders don’t have to use drag chutes.

Rather than having the black Corvette Z06’s original 7-liter, 500-hp V8 engine under the hood, the Genovation GXE has electric motors on board that total 700 hp. And while the gasoline-powered Z06 makes a respectable 475 lb-ft of torque, the GXE has 600 lb-ft.

The GXE is a street-legal car, which according to IMRA rules means it has a valid license plate and is insured to be driven on normal roads, not just at the track. (If a car is aiming for a Guinness World Record, it has to have air conditioning and a passenger seat with a seatbelt. The GXE did indeed have a passenger in that seat, with helmet and race belt, for the record-setting run, though it wasn’t Guinness-certified.) Genovation says the GXE has a range of 130 miles when it’s not being raced full-out in a record attempt, which is plenty for the daily commute.

The company’s CEO, Andrew Saul, said in a press release that the car can do even more, even at the track. The day Bohmer set the record in the GXE was only the car’s first day of development testing. Expect to see it setting another record—as long as you don’t blink.