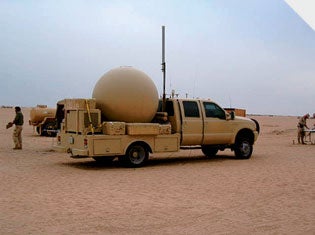 This NBC truck carries a satellite dish that transmits video, even at 50 mph.

As the Third Infantry Division rumbled toward Baghdad in early April, the late NBC News correspondent David Bloom crouched inside a tank recovery vehicle. His mission: Fire video footage via microwave to a $500,000 customized truck trailing a few miles behind. NBC had equipped its warmobile with a satellite dish that rotates on a gyroscope, allowing it to send video, even at 50 mph. “This is the first time anyone has ever transmitted from a vehicle at full bandwidth while moving,” says Stacy Brady, vice president of NBC News field operations.

The satellite truck is one of several new battlefield innovations that have transformed the way reporters deliver news.
For live feeds, most correspondents relied on videophones like 7E Communications’ Talking Head 2, which debuted last
year in Afghanistan. “It’s the easiest and quickest to set up,” says CNN reporter Kevin Sites. About the size of a lunch box, TH-2 employs the latest video compression scheme to transmit images at 15 frames per second. Video quality is sketchy, but TH-2’s portability allowed Sites to get the live shots he couldn’t have captured with the older 70-pound satellite phones and 2-ton dishes.

The Swedish IPT Suitcase, a bulkier but faster portable communications system, is seeing some of its first action in the Gulf. Used by Japan’s NHK and Qatar’s Al-Jazeera networks, the Suitcase can transmit broadcast-quality video and audio about 15 times faster than the TH-2. Reporters plug a digital video cam into the suitcase, which uses a built-in GPS to find the nearest satellite.

Of course, equipment is
always at the mercy of the
elements. Sandstorms and
passing aircraft play havoc
with satellite delivery. Adding
another impediment, the U.S. military banned the popular Thuraya satellite phone, which can transfer data on the move, because it feared the phone’s built-in GPS system would reveal troop positions.

Overall, though, the tech developments have “made a huge difference in the way
we cover war,” says Frank Governale, vice president of operations for CBS News. “’91 was
an analog war–we had big
satellite uplinks we couldn’t transport. Digital technology and smaller uplinks have made it a whole new ballgame.”