Digital music wants to be your friend. Really. Everything you need to know about how we listen now. 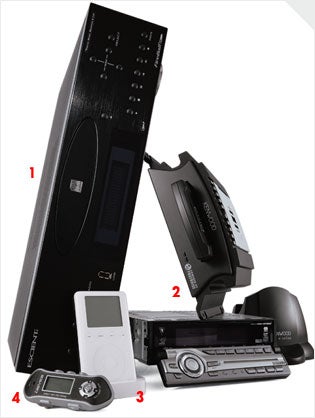 Unless you’ve been living under a rock for the past 5 years, you’re aware that digital music has given its listeners unprecedented freedom to manage and move their music. It’s also been running roughshod over the music industry (which still hasn’t completely stopped blaming digital music for declining CD sales). However, their participation in some of the new digital music ventures gives us hope they’re getting hip to the notion that their industry will survive not despite, but because of these advances. Here’s a summary of how things looked five minutes ago.

1. ESCIENT FIREBALL DIGITAL MUSIC MANAGER: An all-in-one digital music component for your stereo system, combining a hard drive for MP3 and WAV file recording and playback, access to Internet and Sirius satellite radio stations, a CD drive for ripping and burning, the ability to load music onto compatible portable players, and CD changer control–all made extraordinarily simple through a well-integrated, remote-control-friendly user interface (complete with album cover art) displayed on your TV screen. (40GB and 120GB models available at $2,000 and $3,000 respectively.) escient.com

2. KENWOOD EXCELON MUSIC KEG: It’s easy to keep your car in tune–thousands of tunes, in fact–with the Music Keg KHD-CX910 ($600). The main unit (mounted in the trunk or under your seat) accepts 20GB hard disk cartridges, each with room for about 5,000 songs. To put that in perspective, with this setup you could drive cross-
country five times without hearing the same song twice. To fill up on music files, just attach the included USB docking cradle to your PC and transfer files from computer to cartridge. kenwoodusa.com

3. APPLE iPOD: A slim, elegant design, plenty of storage (10, 15 and 30GB models at $300, $400 and $500), excellent audio quality, decent battery life and an easy-to-use interface–what more do you want? How about new touch-sensitive controls? Beyond MP3, iPod also plays downloadable audiobooks, and it’s the only portable player for iTunes music downloads. apple.com

4. iRIVER IFP-390T: This pint-size powerhouse does it all–MP3 and WMA playback, FM radio, MP3 music file recording using the line-in jack, and surprisingly clear voice recording with the built-in mic–all in a solid-state device that weighs just over an ounce. The iFP-390T, with 256MB of memory (shown), runs $200; its big bro, the iFP-395T ($300), has 512MB. Both feature an easy-to-read backlit LCD screen and intuitive controls. iriver.com

MP3 ISN’T EVERYTHING, BUT IT’S CLOSE: MP3 isn’t the only compressed audio file format in town. Microsoft promotes its WMA format, Apple uses AAC for iTunes Music Store downloads, RealNetworks has RealAudio files. All three claim their format is best, and each one contains Digital Rights Management technology that can limit where, when or how you might use the files. Both MP3 and the open-source favorite Ogg Vorbis are unrestricted, meaning you can copy, play, and manipulate the files any way you choose. When in doubt go with MP3–it’s supported by just about any playback device you’ll own now or in the future.

BIGGER FILES = BETTER FILES: The one setting you should consider adjusting before ripping MP3s is the bit rate. The higher the bit rate, the better the sound quality but the larger the file size. The standard setting is usually 128 Kbps, which is a good compromise. If you’ll be saving the music files to a big fat hard drive, though, try ripping at 192 and 256 Kbps as well, then decide if the audio improvement justifies the increased file size.

YOU ARE YOUR OWN RECORD COMPANY: If your computer can burn CDs, you can create standard audio CDs from MP3 files by converting them into WAV files. The sound quality isn’t perfect, but it’s a great way to listen to your digital audio files on a car CD player. You can also burn regular old MP3 files to disc. Because MP3s are small, you can fit approximately 10 albums worth on a single CD, but you’ll need a compatible player to listen to it.

THE FINE PRINT MATTERS: Purchasing songs via digital download isn’t a big business yet, but it’s growing. Leading online vendors include BuyMusic, MusicNet, Rhapsody and iTunes Music Store. Read the fine print, though: Some services only let you listen to songs you’ve bought as long as you remain a subscriber, others sell songs in formats that may not work with your portable player.

MUSIC WANTS TO BE FREE… There are many opportunities to download MP3s legally, for free. Check out mp3.com, where you’ll find a mix of established artists and wannabes offering free tracks. Other good sources: record company and music magazine sites.

…EXCEPT WHEN IT DOESN’T: The Recording Industry Association of America believes that sharing copyrighted music on the Internet is illegal. To prove its point, the group has started to sue individuals who use file-sharing software. Leading file-sharing programs include Kazaa, LimeWire and BearShare. What you did with them used to be your own business. Now, it’s also that of the RIAA.

WHAT WE LOVE ABOUT DIGITAL MUSIC

Carrying a Wurlitzer’s worth of music in your jeans pocket is a teen dream come true.

With your music collection on a hard drive, there’s no more hunting through stacks of CDs when you get the urge to hear that Japan-only remix of Deee-Lite’s first album.

Online sources, legal and otherwise, let you explore the world’s musical smorgasbord without changing out of your jammies.

WHAT WE HATE ABOUT DIGITAL MUSIC

It’s tough to feel sorry for the Madonnas and Metallicas of the world, but acts without the bling bling can really feel the pinch of music piracy.

“Sir, we’ve been tracking your file-download activity, and I’m afraid you’ll have to come with us.”

Don’t get too misty: The best is yet to come.

College students Justin Frankel and Dmitry Boldyrev create Winamp, the first mainstream MP3 player software, and offer it for free on the Net.

Apple launches iTunes Music Store, selling 5 million downloads (at 99 cents a song or $10 an album) in its first eight weeks of operation.

Wireless technology and receiver-equipped headphones make it possible to access the entire library of commercially released music wherever you wander.