Video: Summer School at Stanford Yields a Way to Write Braille on Your iPad

Typing in Braille is tricky, requiring clunky and expensive dedicated devices–some costing as much as $6,000–with limited functionality beyond their... 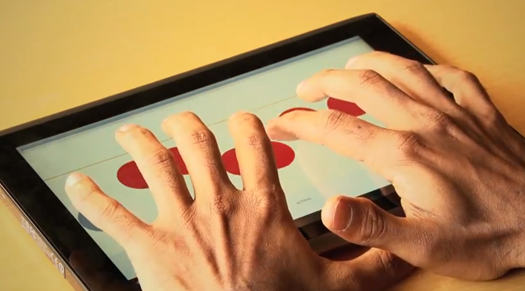 Typing in Braille is tricky, requiring clunky and expensive dedicated devices–some costing as much as $6,000–with limited functionality beyond their primary design parameter. But a team of researchers at Stanford, including an undergrad on loan from New Mexico State University, have created a touchscreen interface that brings the ability to write in Braille to tablet PCs.

The team had originally set out to create a Braille character reader for the Army High-Performance Computing Research Center, which invites undergrads from across the country to its stanford center each summer for a two-month advanced computing competition. But as New Mexico State’s Adam Duran began working on the challenge, he and his Stanford mentors realized that the killer app was a Braille writer, not a braille reader.

That’s because, as noted above, the current electronic means of helping blind people write are pretty cumbersome. Things like penning a quick email require what’s basically a specialized laptop good for little beyond typing on the specialized eight-key keyboard format used to type in Braille. A touchscreen Braille writer could deliver the same functionality at a fraction of the cost via tablet PCs or iPads, which also have the added functionality inherent in the entire app universe.

But there was a key challenge. How would a blind person be able to know where the keys are on a flat, texture-less glass touchscreen? The solution they came up with is both smart and completely simple: design a system in which the keys find the fingers rather than the other way around. The user simply puts eight fingers anywhere on the glass, and the app calibrates the keys to match where the fingers are resting. The user can then type away; if the user loses his or her orientation to the keys, simply lifting all fingers from the screen for a moment and then touching all eight fingers again re-calibrates the keys to the fingers.

Beyond being utterly simple to use, the app is also completely customized to each user’s specific hands and fingers, accommodating their natural typing styles and differences in their finger sizes. There are a few more technical obstacles to be overcome but the app could soon land in app stores, making writing in Braille portable, more functional, and easier than ever before.