Why scan when you can snap? 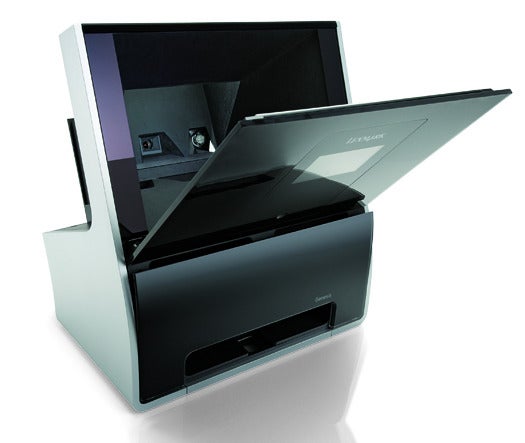 For more than 20 years, flatbed scanners have used slow-moving sensor bars to copy an image by scrolling over documents a little at a time. In replacing that bar with a retooled camera sensor, the Lexmark Genesis captures the entire image in a flash. It can do in three seconds what other scanners take upward of 10 seconds to accomplish.

The Genesis has more in common with a digital camera than with a conventional scanner. A 10-megapixel sensor shoots documents through a lens made of six reflective elements, which grab more light to help take clear images even at close range. The sensor grabs six exposures in rapid succession—one each for the scanner’s pairs of red, blue and green flash bulbs—and combines them into a single picture. The image processor on the Genesis corrects the image warping caused by using a wide lens up close.

The process seems nearly instantaneous. Less than a second after the scanner door closes, a preview pops up on the 4.3-inch touchscreen. Within three seconds of hitting the scan button, a full image is ready to print, e-mail, or upload directly to Flickr, Picasa or PhotoBucket over Wi-Fi.

The Genesis isn’t the only scanner to use Wi-Fi, though: A new crop of scanners is making good use of wireless to send docs directly to the Web, sans computer. The business-minded Fujitsu ScanSnap S1100 ($200 (est.)) beams receipts, business cards and more to Google Docs or Evernote. The HP PhotoSmart eStation ($400, hp.com) talks to the Web with apps, such as one that links directly to a Yahoo account. The Doxie portable scanner ($150, getdoxie.com) can be programmed to create a 20-character URL for each item.