With Australian Mesh-Network System, Cellphones Work in Remote or Disaster-Struck Areas, No Need for Towers

In a disaster, cell phones are not even as useful as the antiquated land line — towers might topple, and... 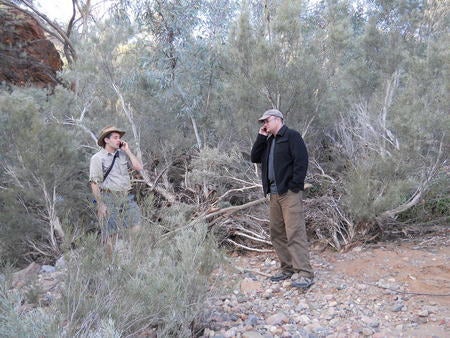 In a disaster, cell phones are not even as useful as the antiquated land line — towers might topple, and service may jam as people overload the system with calls. Australian researchers tested a new system last week that aims to solve this problem, as well as introduce cell phone coverage to remote areas. It essentially uses cell phone swarms, enabling regular mobile phones to make and receive calls without cell towers or satellites.

The Serval Project, named for an African wildcat renowned for its problem-solving abilities, includes two systems: The first involves dropping small self-powered phone towers from aircraft into disaster areas, where they will provide temporary relief. The second involves a mesh network which can be automatically formed between any Wi-Fi enabled phones.

The system also includes a new “Batphone,” which will be specially designed to work on unlicensed frequencies.

So far, the range between phones is limited to several hundred feet, but team leader Paul Gardner-Stephen of Flinders University says adding small transmitters and more phones would expand the range considerably.

Team members tested the software July 9 in a remote, reception-free area of the Australian outback and were able to create a network among three cell phones that covered one square kilometer (about 0.4 square mile).

The goal is to provide fast, cheap, robust and effective telecommunications systems where conventional phone infrastructure has been destroyed or is not cost-effective, the project’s Web site says.

For instance, after the devastating Haiti earthquake, the mobile phone network was knocked out completely for two days, and did not return to normal operation for a week, PhysOrg notes.

Gardner-Stephen says that with financial support, the systems could be fully operational within 18 months.