Japanese researchers from Tohoku Gakuin University have new video of their ball-balancing-bot in action, balancing on a basketball, carrying water... 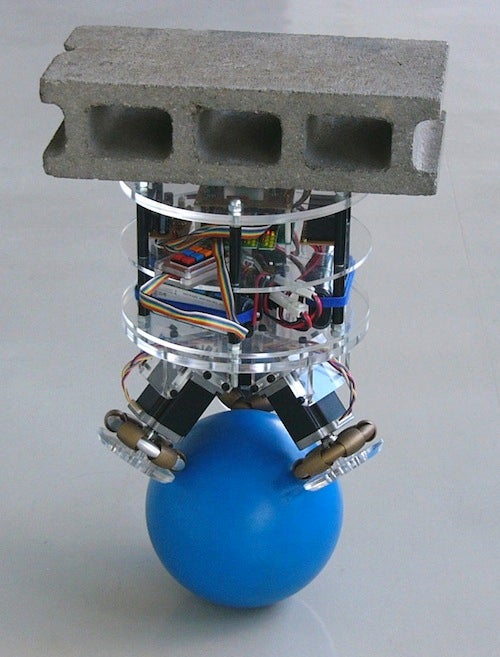 A Japanese robot balances on a ball, carefully carrying stacked glasses of water and concrete blocks on its head. via IEEE Spectrum
SHARE

Japanese researchers from Tohoku Gakuin University have new video of their ball-balancing-bot in action, balancing on a basketball, carrying water and working with a team.

It balances on a ball without tipping over, even if it’s pushed. It safely carries stacked glasses of water, and it can work in concert with other bots to move large, unwieldy objects. Researchers can even turn it into an obedient, robotic wheelbarrow.

Three independent rotors spin to keep the robot’s balance atop the ball, and it can move in any direction, using an “omniwheel” akin to the one under Honda’s U3-X. It was developed by Masaaki Kumagai and Takaya Ochiai at the Robot Development Engineering Laboratory, Department of Mechanical Engineering and Intelligent Systems, Tohoku Gakuin University, Japan.

Dynamically stable robots like this one are better than static bots, which use three or more wheels, researchers say.

They can have smaller bases, allowing them to navigate tight corners. And their omnidirectional abilities allow them to quickly go in any direction without having to turn around.