In the Netherlands, it’s apparently not uncommon for public employees to encounter aggression and even violence while carrying out their... 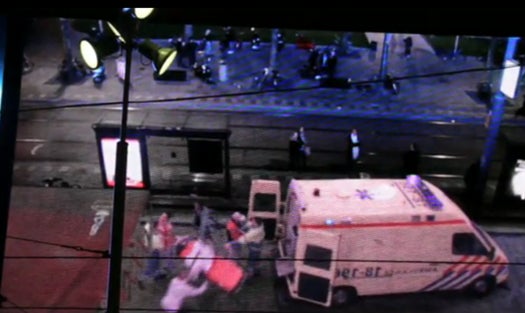 In the Netherlands, it’s apparently not uncommon for public employees to encounter aggression and even violence while carrying out their day-to-day responsibilities. And Dutch citizens, it would seem, would rather not get involved in somebody else’s altercation. So the Dutch government got creative with a public service ad aimed at urging citizens to stand up for their public workers, using augmented reality to place people on the street in the middle of a violent confrontation.

An interactive billboard placed above crowded Amsterdam and Rotterdam thoroughfares displays, in real time, a view of the street below. Passers-by can see themselves live on the massive screen, but though the curb space in front of them is empty, on the screen there’s a tense confrontation unfolding as they stand there and gawk.

The idea is to more or less shame citizens for their inactivity when they see a violent confrontation taking place. By making citizens aware of what they look like when they ignore a wrong being committed right in front of them, the government hopes to engender a sense of shared responsibility and a willingness to come to victims’ aid.

Whether or not it’s achieving its higher purpose, the technology is turning some heads on the street. It appears that being injected into an augmented reality without warning is just as jarring as it sounds.