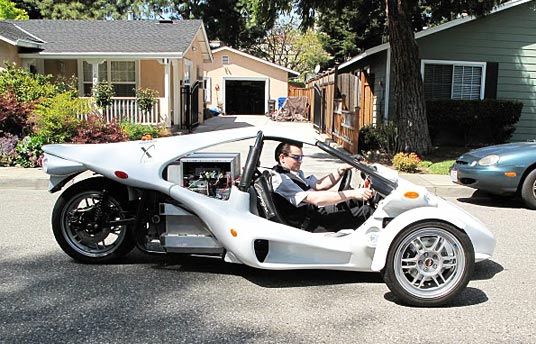 Another contender for the $10 million Progressive Automotive X-Prize has roared onto the scene, in the form of a modified Campagna Motors T-Rex. OptaMotive’s electric version of the three-wheeled car has a range of more than 100 miles and three times the efficiency of Toyota’s Prius hybrid, according to Wired’s Autopia. Speed demons can also rest assured that top speeds should reach around 160 mph, even without the Campagna’s typical motorcycle engine.

The overhauled and redubbed E. Rex has a water-cooled permanent-magnet DC brushless motor courtesy of UQM, which creates 60 horsepower continuous and 167 horsepower peak. E. Rex also holds a lithium-ion battery pack with a battery-management system capable of monitoring each cell’s temperature and voltage.

OptaMotive topped off the modifications by adding a regenerative braking system which operates with about 80 percent efficiency. It also hopes E. Rex can go from zero to 60 mph in a little less than five seconds, or about a second slower than the typical T-Rex or Tesla Roadster.

This car is most definitely built for performance rather than comfort, in case anyone who could afford the regular $51,999 T. Rex was eying the electric version. Autopia said that it “makes the Tesla Roadster feel roomy,” but adds that the lack of windshield and low sitting position enhance the speed experience. We’ll be eager to see how the all-electric vehicle performs against other challengers at the X-Prize shakedown trials at Michigan International Speedway this April.