Do you think your connection speed is fast? Do you tout your torrent bit rate? Perhaps your rig is swift,... 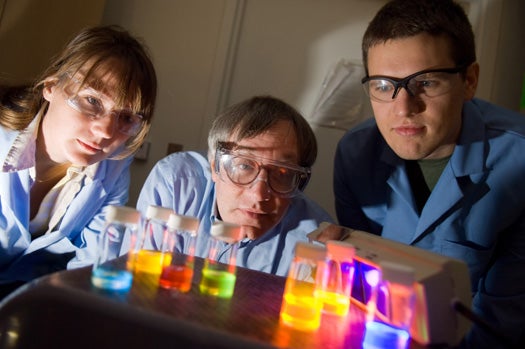 Do you think your connection speed is fast? Do you tout your torrent bit rate? Perhaps your rig is swift, but there’s no reason it couldn’t be many times faster. The only thing standing in the way is some creative materials science, and researchers at the Georgia Institute of Technology may have just found the key to converting everything from individual computers to data networks into blazing-fast, all-optical transmission devices.

The problem with current telecommunications speeds is that no matter how fast we beam information around the globe, time is lost while photonic signals are converted into electronic signals and vice versa. But with the right materials, low-power high-speed all-optical signal processing is possible, cutting out that intermediary step. We just haven’t arrived at the right materials to get the job done in a feasible manner.

But researchers funded by the National Science Foundation and DARPA have developed polymethine organic dye materials that mesh three necessary attributes — large nonlinear properties, low nonlinear optical losses, and low linear losses — into a single package, opening the door for a new generation of all-optical devices that work at telecom wavelengths. That means large files — like that ripped HD torrent of Valentine’s Day that still hasn’t finished downloading to your hard drive — could move across networks far more quickly, facilitating everything from advanced telepresence apps to the rapid sharing of detailed medical images to better Web TV.

Of course, identifying the molecular structure of these materials is a tremendous step, but it’s only the first. While the research team has figured out how to optimize the molecules for all-optical switching, they did so in a laboratory setting and with the molecules in solution. To get to practical devices that could be implemented in telecom infrastructure, they’ll have to get the molecules working reliably in a denser state.

But it’s a goal worth pursuing; the team estimates that current infrastructure could be pushed to transmission speeds of up to 100 gigabits per second (Google is currently looking to test a network a fraction of that speed), but all-optical processing could, in theory, blow conventional switching out of the water with searing 2,000 gigabit-per-second speeds, making even the fastest of current connections look downright pitiful by comparison.