‘Silicon Valley’ Is Secretly Teaching You About The Real Tech Industry

Season three of the HBO sitcom borrowed from Facebook and Google 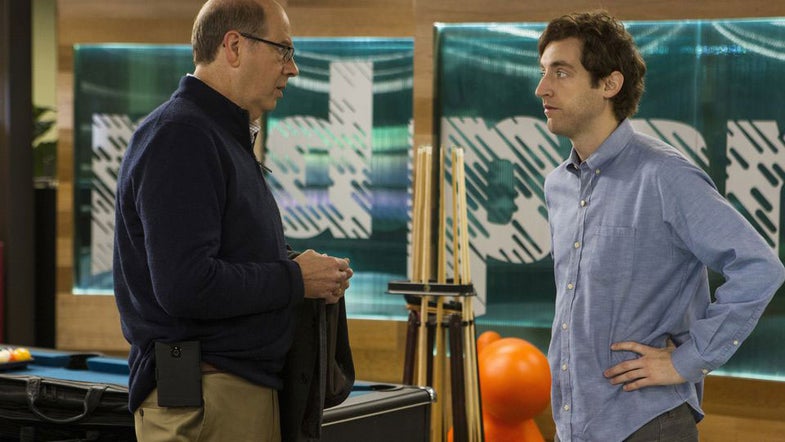 Through its first two seasons, HBO’s Silicon Valley closely mirrored the day-to-day of the tech companies throughout the counties of San Mateo and Santa Clara. As Jonathan Dotan, the show’s associate producer and technical consultant emeritus, told Popular Science earlier this week, Pied Pier, the compression company built by Richard Hendricks (Thomas Middleditch), had to function like an actual start-up.

“Our focus was defining what Pied Piper was,” says Dotan. “We realized that, like a start-up, we needed to recruit people who were domain experts in compression, as well as people who could answer biz dev and engineering questions. That’s when the level of scrutiny went to the next level.”

Season two, which featured peer-to-peer live streaming via webRTC to show a man drinking his own urine, helped nudge Google to further develop, and ultimately unveil, their live streaming with VP9 codec, but for season three, Dotan, along with Mike Judge and Alec Berg (Silicon Valley‘s creators), had to continue a plot that would showcase Pied Piper’s uniqueness as well as keep pace with what was actually being developed throughout the actual Silicon Valley.

Richard and ‘Action’ Jack Barker (Stephen Tobolowsky), Pied Piper’s new CEO, are each vying for control of the company’s future. Richard wants to standardize Pied Piper’s compression globally, while Barker sees the bubble’s burst on the horizon and wants to design an appliance that can quickly be monetized. “An appliance is a dinosaur solution,” says Dotan. “It is the standard terrible way of implementing technology.”

Dotan had brought in Ed McManus, who founded several companies (including Yard Sale), as this season’s lead technical consultant and, along with the show’s ‘dream team’, crafted the next step in Pied Piper’s transformation. “We designed the Pied Piper platform based on openness. The peer-to-peer sharing increases the efficiency of the distribution,” says Dotan. “It’s like Dropbox or Youtube or Facebook Video.”

The group also added a wrinkle — Pied Piper would rely on neural networks. When the data became centralized, the neural networks would find patterns within all the reams of information. Essentially, the more people that used Pied Piper, the better, and smarter, the system became: “This is what Google and Facebook are doing now as part of their compression platforms.”

As the show’s writers were early in season three’s writing process, Dotan had to sell Judge and Berg on why Pied Piper’s neural net was so crucial. “Mike had asked me to explain why it mattered,” says Dotan. “It matters because Richard is right. His platform is truly superior. This is motivational, and it is why he goes to such great lengths to protect this vision. He believes this tech is as powerful as it is.”

During Richard’s pitch to Pied Piper’s hastily assembled team, he relies on several slides to explain the compression system, which Dotan provided to Popular Science to give some more context.

The second slide is a basic overview of Pied Piper — the peer-to-peer distribution system brings that data that the neural nets explore and learn from. The deep learning is the platform’s ‘secret sauce’ (according to Dotan) and it ensures the compression algorithm will continually improve.

The next slide, titled ‘Product/Market Fit’, is a snapshot explainer of why Pied Piper is better than any other platform on the market. ‘License regimes’ represent licenses bodies which control video formats and, says Dotan, “…are in their best interest not to innovate. They are the complete antithesis to Pied Piper.” At the other end of the slide’s spectrum are open source platforms, which won’t work either for Hendricks and company since Pied Piper can’t make money.

Pied Piper’s sweet spot, then, is as an ‘application driven’ platform; or, as Dotan explains, “If the application succeeds, it means that Richard’s compression platform becomes the standard because so many people use it.” And while there wasn’t a model for Pied Piper — Dotan says the company is an amalgamation of dozens — he does add that the show’s mimicked Skype’s go to market strategy. “They developed their own compression standard, and it became the defacto standard,” says Dotan.

There is also a joke on the third slide that, until Dotan explained it, would only appeal to engineers. The ‘Bet your bottom daala’ is a reference to Mozilla’s open compression system, while ‘HEVC advance’ is a licensing administrator that charges for the right to use their video codec. If Pied Piper wasn’t fictitious, the company could become a compression juggernaut: you wouldn’t have to to pay patent royalties for a streaming license.

While Judge used to be a programmer, and Berg is fascinated with the field, this slide was a must-add for the show’s compression consultants. “It’s a joke, but when engineers try to be comedians, this is what you get,” says Dotan. “It is engineers at their best and worst.”