The Amphibial Canary is Dead 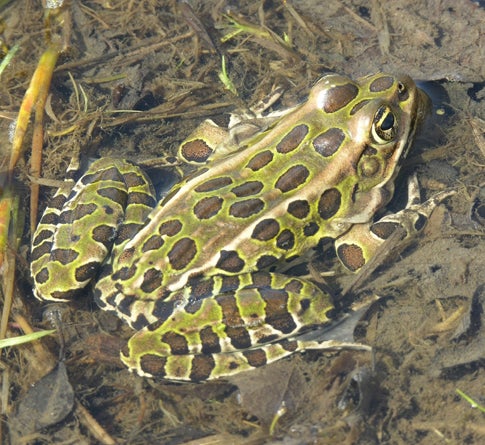 While canaries are yet to raise the red flag on pesticide exposure, new research from the University of Pittsburgh shows that “ten of the world’s most popular pesticides can decimate amphibian populations when mixed together even if the concentration of the individual chemicals are within limits considered safe.” ‘Decimate’, here, is not hyperbole.

Associate professor of biological sciences Rick Relyea exposed gray tree frog and leopard frog tadpoles to small doses of 10 pesticides (insecticides and herbicides… so, agricultural pesticides: the same stuff that’s harming the bees. See below) that are used world-wide. Following the pesticide bender—exposure to all 10 chemicals– 99 percent of the leopard frog tadpoles died.

Back in August, I wrote an article here on PopSci.com about pesticides and bees; in a nutshell, the combination of pesticides that bees pick up outside of their hives is proving to contribute to Colony Collapse Disorder. Although the various pesticides are ‘approved’ as safe at certain levels, their combinations have not been tested for safety, and bees’ plant-hopping pollination habits are generating some toxic chemical cocktails in honey-bee homes.

In Relyea’s recent study, Endosulfan-a neurotoxin (which, although it is banned in many parts of the world, is still widely used in US agricultural production) killed 84 percent of the leopard frogs. “Endosulfan appears to be about 1,000-times more lethal to amphibians than other pesticides that we have examined,” Relyea said. “Unfortunately, pesticide regulations do not require amphibian testing, so very little is known about endosulfan’s impact on amphibians, despite being sprayed in the environment for more than five decades.”

Relyea has focused his efforts, over the past nine years, on investigating the connections between the global decline in amphibians, routine pesticide use, and its potentially adverse affects on humans. Amphibians are an environmental indicator species (enter the proverbial canary); their sensitivity to pollutants can hint at what’s to come for other types of animals. The pesticides that Relyea used in his study are easily transferred, by wind and water, beyond their initial locations. While the EPA has set guidelines regarding human lifetime exposure to pesticides, testing and limit-setting have neglected to account for the natural processes by which materials move throughout and between ecosystems. Or, say, crop fields. Note to the public: the canary is dead, or at least looking worse for the wear. Amphibians are dropping like bees, and it’s time we paid attention and demanded a higher standard of pesticide testing and regulation before it really is too late.