A House Built from Bottles

Two college students develop an idea that could solve two of the world's major problems: a lack of affordable housing and an overabundance of plastic bottles 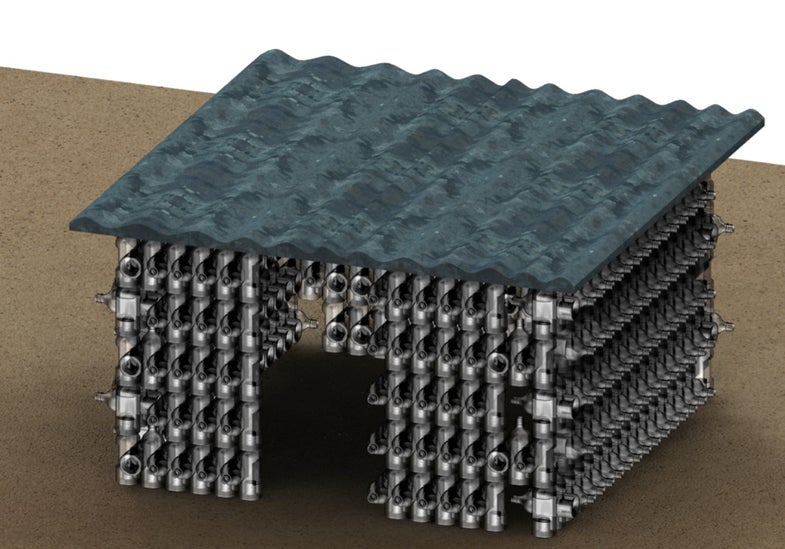 People around the world guzzle about 50 billion gallons of bottled water a year, and then toss billions of those plastic bottles into the trash heap instead of the recycling bin. Matt Naples and Peter Zummo think they can take this lemon of a fact and turn it into lemonade—or rather, take those discarded water bottles and turn them into chairs, shelves, or houses for the world’s poor.

The two industrial-design students recently unveiled a plan for water bottles that snap together like Legos. You drink up as usual, but instead of tossing your empty containers, you can use them as building blocks for furniture or shelter. The bottles stack to create almost any form imaginable, since they connect in two different ways: Click the top of one into the bottom of another for a straight line, or get a plus-sign shape by turning them crosswise and interlocking their notched middles.

Lego-like though they are, the bottles can create structures far sturdier than a toy—and do so essentially for free. Filled with dirt, sand, or another widely available material, the bottles become heavy enough to act like regular bricks. Build a house from them, and the sand or other filler would serve as an insulator to keep rooms warm or cool. Meanwhile, the plastic would make the house waterproof and thus more permanent than the plain mud huts often found in the poor countries.

Naples and Zummo drew their inspiration from a U.N. description of the world’s major problems. One of these problems—the lack of clean water in many developing countries—is commonly addressed by trucking in bottled water. So Naples and Zummo decided to take that solution and turn it into a solution for affordable housing, too. It could even end up helping impoverished people earn money. “In the U.S., for most people, their house is their major asset,” says Phil Weilerstein, the executive director of the National Collegiate Inventors and Innovators Alliance, which helped fund the project. In developing countries, people can’t sell or borrow money against an easily destroyed mud hut, but a house built from durable, rain-proof bottles could prove more valuable.

The pair, undergrads at Rensselaer Polytechnic Institute, introduced their idea at last month’s March Madness for the Mind, an expo run by the NCIIA. They’ve produced several bottles so far on rapid-prototyping machines, and have done computer simulations to show the variety of structures that the bottles could support. Next up: Trying to get funding to mold their bottles on the same machines that real manufacturers use. “One of the benefits of the design is that it fits in today’s standard processing,” says Naples. Manufacturers wouldn’t need to change equipment, shipping methods, or vending machines. “Anywhere you see a bottle today, it’ll still fit into size and shape constraints.”

Will two college kids be able to talk companies like Coca-Cola or Evian into revamping their bottles? “They’re in a challenging space, but they’re addressing a really urgent need,” says Weilerstein. And maybe the world is thirsty to give the needy new homes.