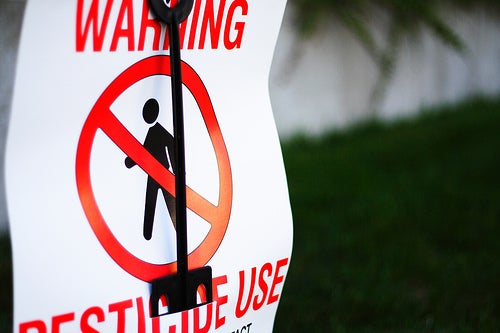 While the root causes of Parkinson’s disease are still largely unknown, a mounting body of evidence suggests toxins in our environment may be most responsible for its manifestation. A new study by a team of a researchers from Duke and the University of Miami has demonstrated that exposure to pesticides is a significant contributor. The study focused on family members who shared a predisposition to Parkinson’s and concluded that those who developed the disease were more likely to have been exposed to pesticides than their relatives.

Pesticides basically come in two flavors: organophosphates and organochlorides. Organochlorides (which were also the main ingredient in early nerve gasses like sarin) have largely disappeared since DDT was banned in the 1970s. Organophosphates stepped in to take their place because they degrade more quickly than the persistent organochlorides. The downside, however, is that organophosphates have a greater acute toxicity. Both compounds kill pests by disrupting their nervous system. In the eyes of the molecule, we are no different from a roundworm or a boll weevil.

Surprisingly, no correlation was found between drinking well water or living or working on a farm, which are two common indicators of exposure. And while the link between Parkinson’s and pesticides has been shown in previous studies, what this research illuminates is that genetic predisposition is not necessarily a marker for developing the disease. The next step: understanding the biological mechanisms for how pesticides bring Parkinson’s about.