Despite the three gold gloves, multiple forms of statistical analysis show that "the Captain" is the worst-fielding shortstop in the Majors 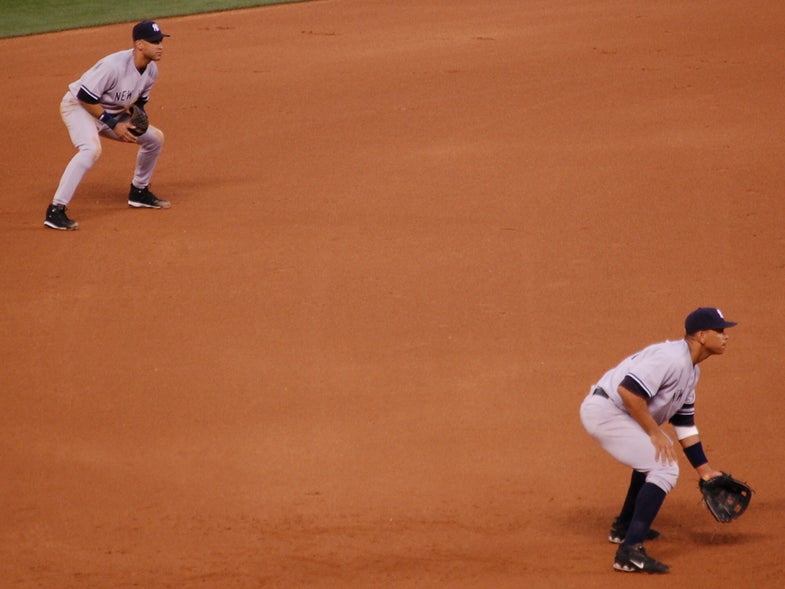 Once upon a time, the only fielding statistic listed on the back of baseball cards was fielding percentage, a simple calculation of the number of assists and putouts a player records divided by total chances. But this only tells you how well players handled the balls that they were able to put a glove on, giving pretty much zero insight into how much ground a player covers at his position and, ultimately, his impact on the outcome of the game.

Enter Spatial Aggregate Fielding Evaluation, or SAFE, a new yard stick for fielding developed by professor Shane Jensen and his stat-junkie colleagues at the Wharton School at the University of Pennsylvania and presented today at the AAAS Meetings in Boston. In short, Jensen examined every hit from the 2002-2005 baseball seasons and developed a formula that spit out the probability of the average player at each position recording an out on a batted ball. He then compared this to individual players’ stats and determined how many runs each player’s fielding performance either saved or caused.

First basemen, it turns out are relatively inconsequential when it comes to fielding balls. On average, the best first basemen will only save their team one or two runs over the course of the season; the very worst only cough up five. The distinction is much more apparent at the shortstop position, where Alex Rodriguez was the best everyday shortstop in the league, saving 10.40 runs each season for the Texas Rangers. Derek Jeter, the New York Yankees shortstop who is often hailed for his defensive prowess and has won three Gold Gloves, ranks dead last in the majors, coughing up 13.81 runs per season. Before the 2004 season, the Yankees traded for A-Rod and shifted him to third base in deferrence of Jeter, but based on these numbers, that move could be costing them 23 runs per season. Would the Yankees be better off with A-Rod at SS? Probably, but I’m a Red Sox fan, so I’ll keep quiet on this one.

But the lack of a definitive method of measuring fielding excellence has spurred many statisticians to create their own stats. David Pinto, formerly the chief baseball statistician at ESPN, has devised what he calls the Defensive Efficiency Ratio, or DER, which, in simple terms, determines the probability, at each position, that a fieldable ball results in at least one out. (This approach is slightly different from SAFE, which rates fielding efforts based on how many runs a player prevents or allows.) Pinto compared the expected number of outs to actual stats to evaluate each fielder’s performance.

This is where some interesting ambiguities between statistical facts and baseball strategy arise. Colorado Rockies shortstop Troy Tulowitzki led all shortstops, recording 50 more outs than was expected of him. In particular, Tulowitzki picked up most of his extra outs on the third base side of shortstop. Meanwhile, Garret Atkins, the third baseman for the Rockies, recorded 41 fewer outs than was expected of him. But does that mean that Atkins is a bad fielder? The stats would say yes. But perhaps his coach is telling him to play near the line, putting him out of position of balls that are running through zones that third basemen are expected to cover and being gobbled up by Tulowitzki, who is being told to play a shade deeper to help cover Atkins’ ground. Such a strategy would artificially drop Atkins’ outs recorded while simultaneously increasing Tulowitzki’s, but, looking at the stats alone makes it difficult to say if this is the case. “It’s quite possible that Atkins’ fielding weakness is accentuated by strategy, and that’s what we’re seeing here,” Pinto says. “But, my guess would be that if he were a better fielder, you would see a much more balanced split between the two players.”

Despite this and other shortcomings, fans and statisticians have never known more about defense than they do today. “Fielding, in general, was a fairly intangible tool,” Jensen says. “I think we’ve helped make it more tangible.”