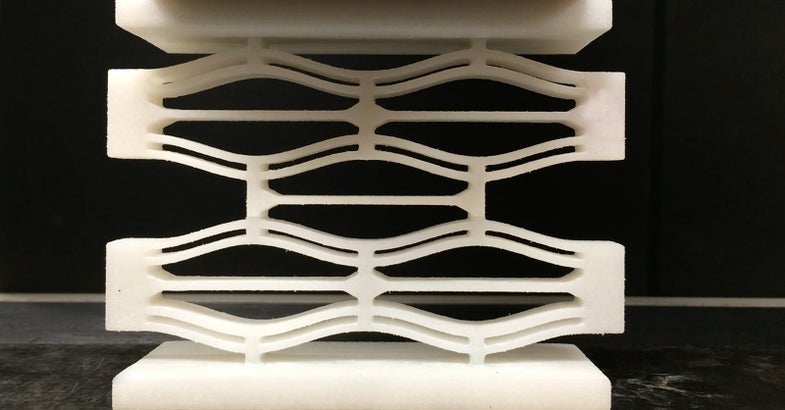 Armor can be light, durable, and effective, but rarely all three at the same time. New research from the University of Texas Austin has a new solution: a honeycomb shape, but one durable enough to reform after impact.

Man-made honeycomb structures used in armor are light: the majority of the space inside them is air. They’re also cheap, generally made from plastics. But the biggest problem with honeycomb shapes is that they’re only good once: a single impact can collapse the whole structure, and then it has to be replaced with a new one. That’s a frustrating flaw when it’s a car bumper or a football helmet, and potentially deadly if it’s in a soldier’s helmet or reinforcing part of a military vehicle.

UT Austin’s new approach is called a “negative stiffness” honeycomb. Instead of rigid hexagonal spaces, the grid is a series of cells, with cross beams and close-together parallel walls. When impacted, this honeycomb compacts, but then is strong enough to resume its original form after the compression is over. The honeycombs were made from nylon, but it’s the structure, not the material, that makes it a breakthrough.

Watch it compress and reform below:

Funding for the project came in part from the Department of Defense, who have some need for light, durable, impact-absorbing armor.