How to enjoy the flavor, history, and science of Turkish coffee

A guide to jumpstart your mornings with this delicious, centuries-old drink. 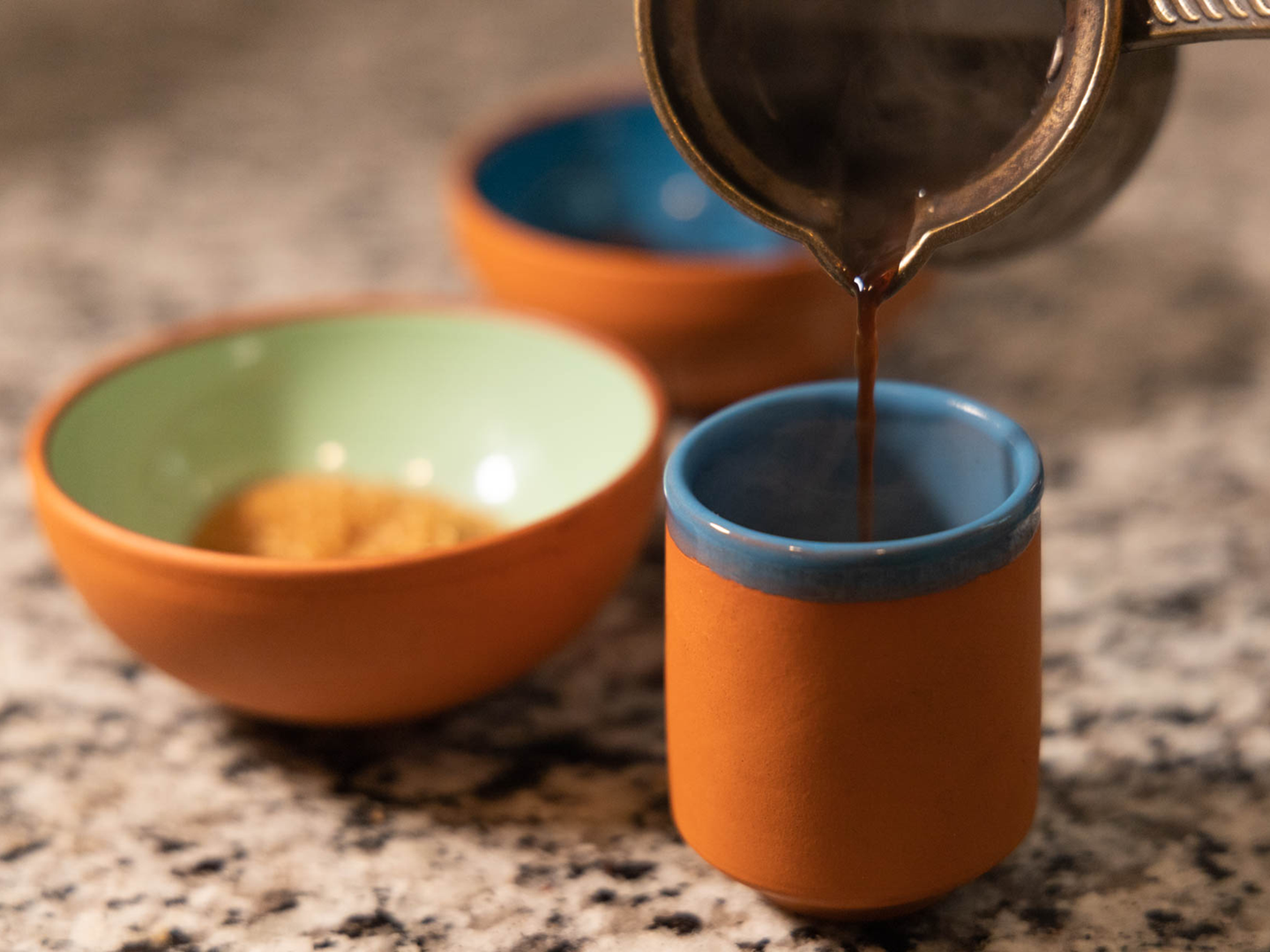 This could be your morning every day. Alisha McDarris
SHARE

Turkish coffee is unlike any other in the world, and it’s a favorite among caffeine lovers. But this dark drink’s thick texture and robust flavor make it an acquired taste, and its preparation is vastly different from most other coffee-making methods.

Making Turkish coffee can be tricky, as this centuries-old tradition requires specialized tools and specific know-how. Fortunately, understanding the science behind the making of this beverage will help you enjoy it at home—no trip to Istanbul required.

How to prepare Turkish coffee at home

We’ll tell you all about the history and science behind Turkish coffee, but you might want to make a cup first to accompany your reading. This is the traditional way to make this aromatic drink.

1. Pour the coffee and water into your cezve. A cezve or ibrik is a traditional Turkish coffee pot. It is usually made of copper or brass and has a long wooden or metal handle that makes it easier to put directly over heat.

Most cezves come in 1-cup (around 2.5 ounces) and 2-cup sizes (around 3 ounces), but you can find them in sizes of up to 6 and 8 cups, so adjust the amount of water and coffee accordingly. The magic ratio for Turkish coffee is 9 parts water per 1 part coffee, says Peter Giuliano, executive director of the Coffee Science Foundation.

If you want to be exact, you can use a kitchen scale, but you can get by with less precise measurements, like teaspoons, for example.

2. Stir with a spoon. Keep going until the coffee is fully combined.

3. (Optional) Add sugar or sweetener and stir. Usually, a teaspoon or two, depending on your taste. Adding it at this stage instead of at the end of the process will ensure the sugar dissolves properly.

4. Place the pot over medium heat until dark foam starts forming. This will happen right before the water starts to boil—around the 4 to 5-minute mark if you’re making one cup. When it does, remove the pot from the stove.

5. Scoop out all the foam. Save it for later by gently scooping it into the bottom of the empty cup you’ll be serving the coffee in. A boiling temperature will destroy the foam completely, so this will ensure you get all the benefits.

The foam in Turkish coffee is similar to crema on a well-pulled shot of espresso, and it’s not only a signal of a quality cup, but it also adds to the coffee-drinking experience. Those tiny bubbles have insulation properties that help your drink stay warm for longer, and trap volatile aroma molecules, which results in enhanced flavor.

Foam forms with the release of carbon dioxide and other gasses that were introduced to the ground coffee during the roasting process. Researchers don’t fully understand how foam formation works yet, but one theory points to the tension change on the surface of the coffee due to the high temperature, which would allow the foam to form and gather.

6. Place the pot back on the stove and let it come to a boil. As soon as it does, remove the pot from the stove.

7. Pour the coffee slowly down the side of the cup to serve. If you dump it in the center, it will dissolve the foam and you’ll mix more grounds into the cup, resulting in a grainy beverage. Stop pouring when most of what’s left at the bottom of the pot is coffee grounds.

Keep in mind that when drinking Turkish coffee there will always be some grounds in your cup—it’s part of the experience. But stopping the pour at this point will prevent the last few sips from being exceptionally grainy.

8. Let your coffee settle for a minute before you drink. This will give the grounds time to sink to the bottom of your cup. Resist the urge to stir your coffee, add milk or more sugar as you’ll mix all the grounds into the beverage, making for a less pleasing texture.

9. Drink your coffee. If you want to abide by tradition, serve your coffee with a similarly sized cup of cool water. But as a guest, you should never drink the water after your coffee, as this is traditionally seen as an insult because it implies you didn’t like it. Instead, drink the water before the coffee as a palette cleanser, explains Emel Kilic, a coffee lover and tour advisor based in Turkey.

Ideally, a piece of Turkish delight will accompany your cup as well. The sweetness of the candy will complement the strength of the coffee beautifully.

Some tradition and science

Turkish coffee, and its particular preparation, is one of the oldest coffee traditions in the world, dating back to the Ottoman empire (specifically to the Yemeni region, in the south) at the beginning of the 16th century. People in the Middle East and southern Mediterranean regions were drinking it long before Americans were chugging copious amounts of brewed beans.

But this ancient coffee is more than a beverage rooted in history—it’s also a modern institution and a symbol of hospitality and celebration in Turkey. For example, would-be brides serve coffee laced with salt to their future spouse and in-laws during engagement ceremonies, which they drink to imply the extent of their love. And it’s still common, if only for fun, to peer into the bottom of your empty cup and attempt to divine your fortune from the remaining grounds.

The brewing method that results in Turkish coffee differs greatly from other techniques Americans are more acquainted with. American coffee is a percolation, explains Giuliano, which involves hot water passing through coffee grounds. This is how drip coffee makers, pour-overs, and espresso machines work.

On the other hand, Turkish coffee is a result of a process called decoction, a more powerful and effective way of extracting flavor that involves boiling the coffee grounds along with the water. By applying direct heat, you extract more flavor from the beans, resulting in the strong and characteristic flavor of Turkish coffee. It also dissolves more superfine coffee bean particles than other methods, which imparts more intense flavor.

But it’s not just the heating and the soaking—the fine grind of the beans plays a big role as well. Turkish coffee requires a grind about as fine as flour, which exponentially increases the surface area of the coffee, allowing hot water to pull even more flavor from every tiny granule.

Additionally, this method leaves tiny bits of non-soluble grounds suspended in the beverage, giving Turkish coffee its unique texture and mouthfeel. Those suspended particles are also linked to the aftertaste. They literally cling to your mouth and tongue after you swallow, Giuliano explains, leading to the continued stimulation of taste and odor receptors in the mouth and nasal cavity: “The amount of time spent drinking is almost trivial compared to the amount of time you can enjoy [Turkish coffee] afterward.”