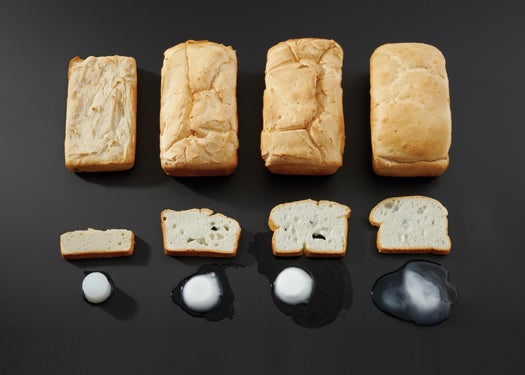 Every loaf of wheat bread contains a seeming contradiction: gluten, a gel-like protein that’s fluid when cool and solid when hot. Gluten forms elastic scaffolding around air bubbles when bread rises (bread is technically a foam) and traps moisture during baking to yield a soft and chewy end product. Too bad millions of people with celiac disease suffer adverse reactions from eating even small amounts of gluten.

To replace the protein, food chemists need an edible molecule that forms strong, mesh-like structures that can trap water as a solid at high temperatures, and then release it back as a liquid as the bread cools. To put it another way, you need something that melts in reverse.

Scientists at Dow approached the challenge by starting with plant cellulose, a long and stringy molecule. They then added molecular side groups along the backbone of cellulose to give it different properties. By varying the numbers and types of side groups, they designed a spectrum of gluten-like substances, ranging from too gel-like to not gel-like enough. After more than 15 years of tweaks, the researchers have created a Goldilocks molecule with just the right properties.

Adding less than 2 percent of the newest molecule to wheat-free bread mix results in light, fluffy loaves with zero gluten. Unfortunately for bake-off enthusiasts, the ingredient is available only to food manufacturers. If there’s enough demand for an off-the-grocery-shelf product, however, it may soon be possible to use a reverse-melting substance in your own lab. Er, kitchen.