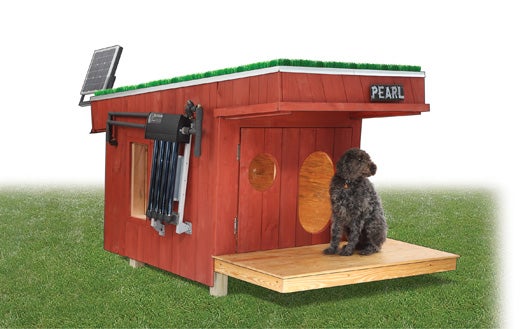 Pearl, my beloved labradoodle, dutifully watched me build myself a new house for the past three years. So when I was almost finished, I decided to build her a place of her own. A standard model just wouldn’t do, though, so I went a little overboard. After creating the design with CAD software, I added a solar hot-water radiant-heating system and made a green roof that retains rainwater, creates oxygen, and improves insulation. Then I decked it out with a few other touches, including some colored LED lights to brighten things up and a Web-enabled wireless video camera that lets me keep an eye on Pearl from my computer or phone. That’s plenty of features for her, but the doghouse has one extra benefit for me: The battery that powers it also powers all the low-voltage exterior lights on my property.

Frame: I chose a size that would be comfortable for a medium-sized dog. I started with a frame made from two-by-fours and added structurally insulated panels to the sides and exterior-grade wood for the porch. 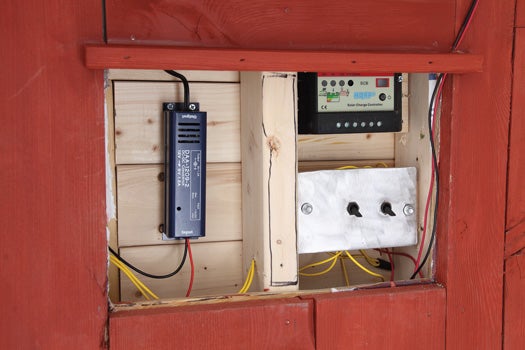 A box houses the solar controller, voltage reducer, and switches.

Solar Collection: The wall with the solar panel has a window and faces south. The opposite side has no windows, so it retains heat.

Electrical: Charged by the solar panel, the gel battery is mounted inside the house. A solar charge controller, switches and other parts are inside a waterproof panel mounted on the exterior for easy adjustment.

Roof: To waterproof the plywood, I covered the roof with a polyethylene film and coated it with a liquid rubber called EPDM. 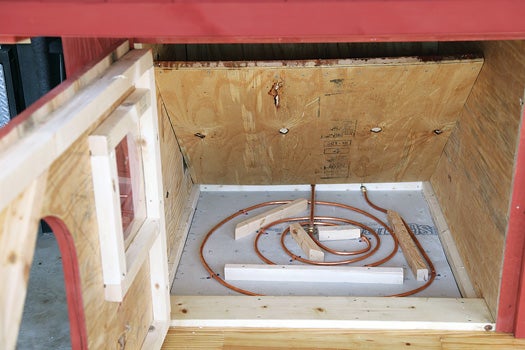 Heating: When the photovoltaic panels are exposed to sunlight, a pump circulates glycol fluid through evacuated tubes to a series of copper pipes underneath the floor. The pipes heat a concrete backing board below them, which in turn disperses heat through the hardwood floor into the house.

Cooling: The entire house is insulated. During warm weather, air can flow from vents in the rear through the front door when it’s left open.

Lighting: The porch ceiling contains a waterproof 12-volt LED light. The two interior lights go on automatically when it gets dark outside.

Security: A motion- and heat-activated Wi-Fi security camera is mounted inside the front wall so I can see when Pearl is inside the doghouse. The camera I used is only for interior use; for an added home-security measure, a model that’s rated for exterior mounting and that pans around would work as well.