Video: A Steerable Remote ‘Telexistence’ Robot that Transmits Sight, Sound, and Touch to the Operator

Keio University researchers are taking telepresence to the next logical level with a new “telexistence” robot called TELESAR V, a... 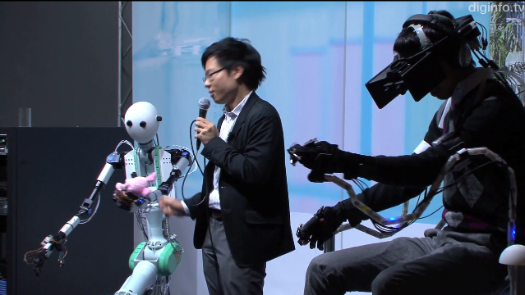 Keio University researchers are taking telepresence to the next logical level with a new “telexistence” robot called TELESAR V, a robotic platform that doesn’t just transport the user’s eyes to another location, but also his or her ears and hands as well. The idea is to break through the limitations of time and space to allow a user to actually feel like he or she is present elsewhere via a remotely operated robot that returns three sensory stimuli back to the user.

Using a head-mounted 3-D visual display, an audio system that streams sound to the user, and tactile gloves that allow the user to feel the shapes and temperatures of objects–currently the robots force vector and temp sensors can accurately relay textures as fine as the unevenness on the surface of a Lego block–the user can manipulate the robot remotely and feel what the robot feels. The designers are looking for a true avatar sensation, one that makes the user really feel that he or she is inhabiting the place of the robot.

This certainly isn’t the first time we’ve seen or heard of this kind of concept, but it is one of the first all around implementations of so much telepresence technology in a single package that–by all appearances–seems to work really well. And there’s no need to take our word for it; see TELESAR V in action below.