Tired of driving around, laptop open on the passenger seat, searching for a wi-fi hotspot? The WASP, a flying wi-fi... 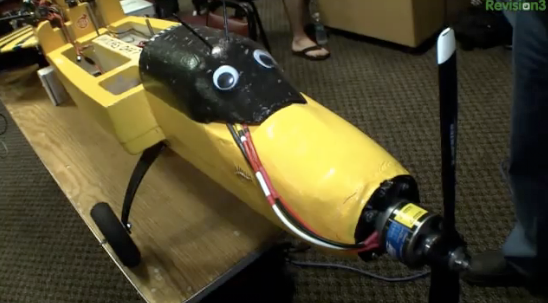 Tired of driving around, laptop open on the passenger seat, searching for a wi-fi hotspot? The WASP, a flying wi-fi sniffer, can make the task easier.

The plane is a surplus U.S. Army target drone, and is much bigger than your average RC aircraft. Controllers fly it for takeoff and landing, but when it’s in the air, it automatically follows GPS coordinates the hacker team has plotted using Google Earth.

It has a wi-fi card in the nose that points downward, affording a 60-degree cone arc of coverage. At roughly 400 feet of altitude, it provides 1,000 square feet of coverage, according to one of the developers, Rich — whose last name isn’t given in this video from Hak5.

It also has a 3G cellphone and a cheap camera on board, allowing controllers to change the plane’s direction if they see something interesting.

As the project’s Web site says, the drone could “offer cyber-offensive and defensive capabilities, and visual/electronic surveillance over distance cheaply and with little risk.”

It could be used for penetration testing of wireless networks, for instance. Other than that, the developers aren’t clear about what they hope to do with their plane. But as sUASNews puts it, getting the attention of aviation authorities will probably be one of the first outcomes.