How It Works: A Lean, Mean Nail Gun

Bosch reinvents the common nailer, making a smaller tool with the nail-driving power of the big guns 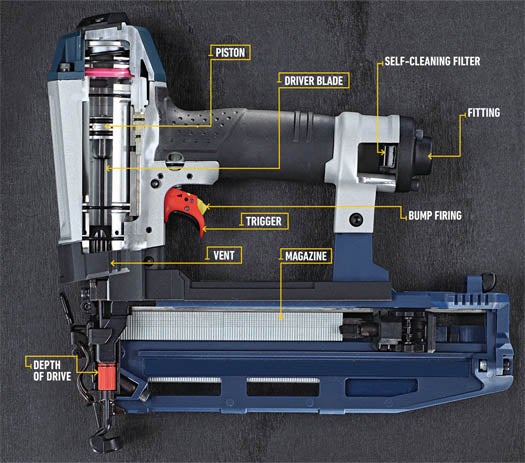 Pneumatic nailers can slash the time it takes to fasten everything from window trim to roof rafters. The basic guts of the tool haven’t changed since the 1960s: Compressed air pushes a piston that drives a rod, forcing nails deep into wood, before the tool resets for the next nail. Now Bosch has figured out how to make a nailer that’s 20 percent smaller while boosting power by 10 percent, so it can drive nails into hard woods like walnut with less pressure than other guns. Instead of reserving some of the compressed air for resetting the piston, which weakens the strike, the tool uses all of the air’s energy to drive the nails. A vent exhausts the air, and a second burst returns the piston. Since Bosch’s nailer can operate at lower pressure, it reduces wear on compressors and components, while still hammering home 1- to 2.5-inch-long nails all day.

Design Highlights on the Nail Gun

Self-Cleaning Filter: The pressurized air leaving the tool cleans this filter, which captures debris like sawdust and dirt, preventing it from clogging the cylinder.

Fitting: A connection to an air hose allows pressurized air to flow from an electric air compressor into the nailer, where it’s moved by valves controlled by the trigger.

Depth of Drive: A dial lets you adjust the distance between the nose and the board, which changes how deeply the gun drives the nail.

1. A spring in the magazine feeds forward sleeves of 16-gauge nails one at a time, putting one directly under the driver blade.

2. Squeezing the trigger opens the nailer’s main valve, letting in air from a compressor that sets the 33-gram aluminum piston in motion.

3. The driver blade, a 5.3-inch steel rod attached to the bottom of the piston, smacks the nail, driving it into the wood.

4. Just behind the nose is a plastic vent that exhausts all the air as the piston descends in less than 0.1 second, so it meets with almost no resistance. A second burst of compressed air pushes the driver blade and the piston back up, ready for the next strike. In conventional nailers, a reservoir captures some of the air and rechannels it to push the piston back into position.