Hubble Discovers the First ‘Waterworld,’ an Exoplanet Covered in Water 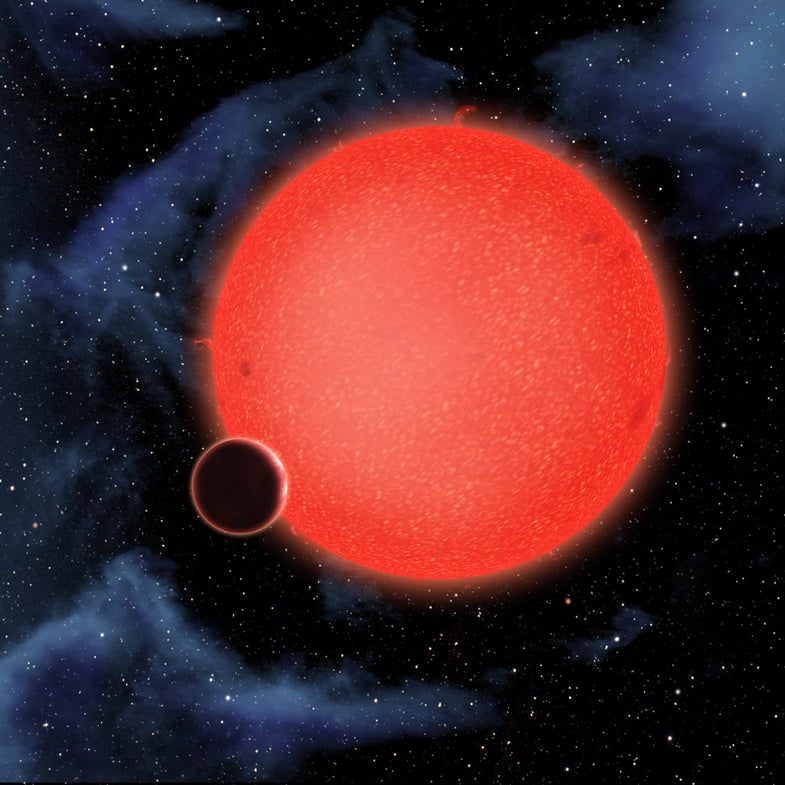 The James Webb Space Telescope may someday put Hubble out of business, but until then NASA’s old standby is still making new discoveries. Today, that comes to us in the form of the first exoplanet “waterworld”–a water-covered planet shrouded by a dense, steamy atmosphere, the first confirmed planet of its kind.

The planet, known as GJ1214b, was discovered in 2009 by ground-based observations. But at that time it was difficult to glean much from the data other than the fact that the planet was indeed out there orbiting a red dwarf and is roughly 2.7 times Earth’s diameter. But its nearness to its star–just 1.3 miles away–meant that scientists could be reasonably sure it is hot there, likely around 450 degrees.

When astronomers from Harvard-Smithsonian Center for Astrophysics more recently turned Hubble’s Wide Field Camera 3 toward GJ1214b while it was transiting its host star, they were able to analyze the light passing through the atmosphere for the first time. That analysis suggests that GJ1214b is swathed in a fairly consistent and dense atmosphere of water vapor. Further analysis of size and mass (and thus density) further suggest that GJ1214b contains more water than Earth, and less rock.

That’s not to say GJ1214b is the kind of watery paradise in which you’d want to go sailing, or even face down a cartel of hapless but well-armed future-thugs. Even if GJ1214b is exactly what the Hubble data suggests it is, it’s very hot there and the high pressures and temperatures would make for some conditions vastly different than those on Earth. Superfluid water and other exotic phenomena likely occur there regularly–things that would be cool to see from a distance but highly incompatible with life as we know it on this planet.

The CfA astronomers responsible for the Hubble research speculate that GJ1214b probably formed further away from its star where water ice is more plentiful. It then resettled into a closer orbit, becoming the steamy sphere Hubble sees today. That means at some point this waterworld would have had to pass through the star’s habitable zone, though there’s no telling how long it hung around there. More at CfA.