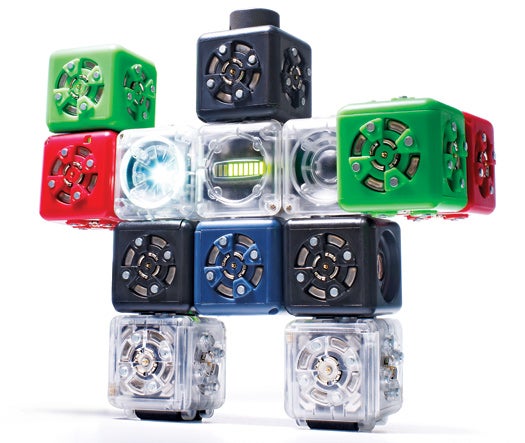 Building and programming robots is no small feat. Just to get a robot to perform a simple action—say, turning when someone claps—can require hours of coding. Cubelets make robot creation as simple as stacking blocks.

Each 1.6-inch cube contains an eight-megahertz processor preprogrammed to execute one function. The six-block starter kit includes a rechargeable battery brick, as well as cubes that roll on rubber wheels, display an LED at varying intensities, and detect changes in lighting. Users configure the blocks however they choose, and the arrangement determines how the finished robot acts. (Magnets hold the blocks together, allowing copper connectors to transmit data between cubes.) The kit can make about 30 different robots; attaching the battery block to wheeled and light-sensitive blocks, for example, produces a robot that walks when the lights turn on.

Users can also buy individual Cubelets that react to changes in temperature, chirp, spin, and more. Later this year, the manufacturer plans to release a Cubelet containing a Bluetooth chip. Through a computer or smartphone browser, tinkerers will be able to reprogram the blocks by accessing their code and replacing commands, such as cues to “go” or “beep,” for an instant behavioral adjustment.