At Dalian Hoffen Bio-Technique Company in northern China, people turn other people into plastic. Plastination is a four-step process during... 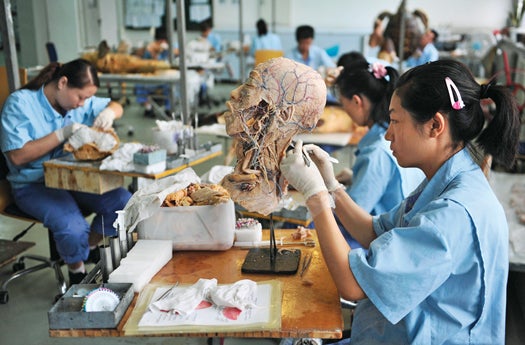 Employees work on partial plastinated human body specimens at a workshop of Dalian Hoffen Bio-Technique Co. Ltd. in Dalian, Liaoning province September 14, 2011. Founded by Dr. Sui Hongjin in 2004, Dalian Hoffen Bio-Technique Co. Ltd. produces, preserves and exhibits plastinated biotic specimens of human and animals. The specimens, including whole bodies as well as individual organs and transparent body slices, each requires four employees to work on it for 8 to 12 months. The exhibits have been meticulously dissected and preserved to allow visitors to view muscular, nervous, circulatory, respiratory and digestive systems. According to Sui, the bodies are legally collected from medical universities. REUTERS/Sheng Li (CHINA - Tags: SOCIETY SCIENCE TECHNOLOGY) CHINA OUT. NO COMMERCIAL OR EDITORIAL SALES IN CHINA. © Sheng Li / Reuters
SHARE

At Dalian Hoffen Bio-Technique Company in northern China, people turn other people into plastic. Plastination is a four-step process during which polymers replace water and fat molecules in biological specimens.

Plastinated bodies don’t decompose, and museums and medical schools can display them with exposed muscles, veins and brains in exhibits around the world. One such exhibit, called “Bodies,” has visited dozens of cities worldwide since it opened in 2005. Hong-Jin Sui founded the Dalian facility in 2002 after he studied plastination under the man who invented it, Gunther von Hagens. Sui says the human bodies processed at Dalian Hoffen come from medical universities and the animals from zoos and aquariums. It can take more than two years to plastinate large animals, such as whales, but humans take only eight to 12 months.