The smallest transistor ever built — probably the smallest that can ever be built — uses a single phosphorus atom,... 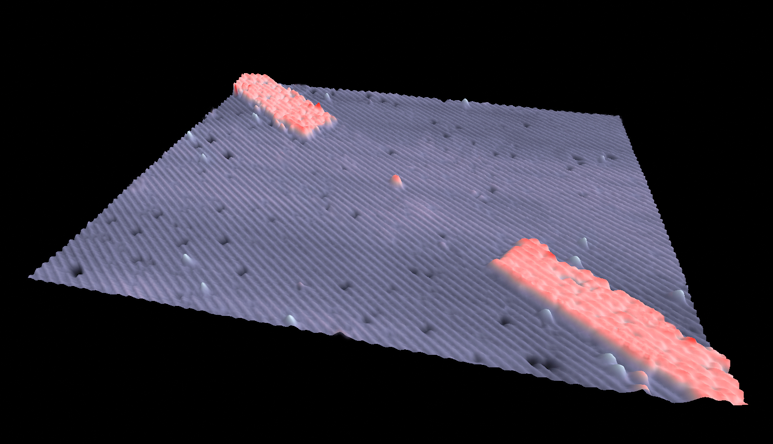 A scanning tunneling microscope image of a hydrogenated silicon surface shows a 3-D perspective of a single-atom transistor. The red-shaded regions form the electrical leads to a single phosphorus atom in the center. Martin Fuechsle
SHARE

The smallest transistor ever built — probably the smallest that can ever be built — uses a single phosphorus atom, in a breakthrough that could be one more step on the path toward functional quantum computers. Single atoms have served as transistors in other studies, but this is the first time researchers were able to engineer its location and apply a voltage in a controlled fashion.

This is possible because of a scanning tunneling microscope, which can be used to manipulate single atoms. The atomic structure of silicon has made it difficult to engineer atomic-scale circuits using STMs, however. Researchers at Purdue University, the University of New South Wales and the University of Melbourne used a combination of STM and etching to make a transistor with a precise location on a silicon surface.

Michelle Simmons and colleagues at the University of New South Wales were able to replace one silicon atom out of a six-atom group with one phosphorus atom. The atom sits between source and drain electrodes, which are less than 20 nanometers apart. The gate electrodes are a tad more than 100 nanometers apart, according to the paper, published in Nature Nanotechnology. Simmons and colleagues applied a voltage across both sets of electrodes and measured the changes in electron states in the phosphorus atom. They found that this change — the electrical current — depended on the voltage applied, just like a field-effect transistor should behave.

“These results demonstrate that single-atom devices can in principle be built and controlled with atomically thin wires, where the active component represents the ultimate physical limit of Moore’s law,” the authors say. Moore’s law holds that the number of transistors on a processor will double every year and a half. When you can make atom-sized transistors — which would mean situating them one nanometer apart — that’s about as tightly packed as things can get.

The only problem is that it must work in ultracold temperatures, about as cold as liquid helium (- 391 degrees F). So for now it’s not practical as a transistor structure for smaller and more powerful processors. But it could be relevant for quantum computation, because it allows for precise control of individual electrons, the authors say.