A long march or a very slow ultramarathon 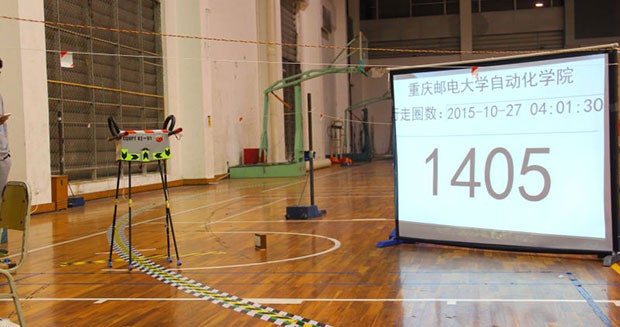 For Xingzhe No.1, the path ahead was smooth. It was also repetitive and unchanging, a flat course in an indoor gymnasium. For 54 hours the robot, whose name translates to “walker,” patrolled the same set path. That’s long enough to watch Waiting for Godot 21 times. Eventually, the robot ran out of power, and stopped. By the time its battery died, it had taken 360,000 steps, covering 83 miles in total. Unconscious and immobile, Xingzhe earned a Guinness World Record for farthest distance walked by a quadruped robot.

Xingzhe No. 1’s design is similar to that of Cornell’s Ranger Robot, the previous record-holder. In 2011, that robot walked over 40 miles in under 31 hours.

Both Xingzhe and Ranger aren’t really designed for real world applications, as there are few jobs that require a robot to walk a smooth circular path until it collapses. Instead, the robot is a lesson in efficiency, in how well a simple design can move, and how long a battery can power its basic movements.

Watch it walk below: