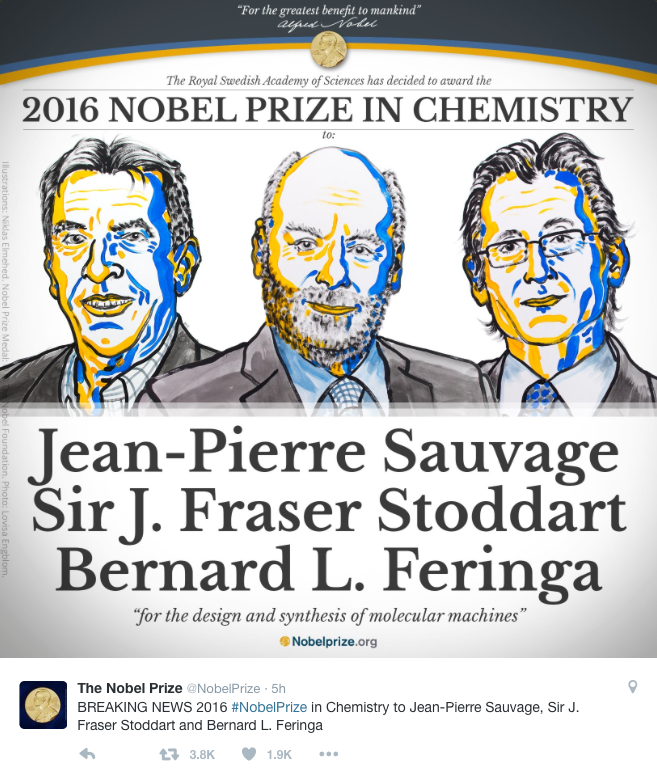 “I feel a little bit like the Wright brothers,” chemistry Nobel laureate Bernard Feringa told the crowd assembled at the Royal Swedish Academy of Sciences via the internet, “who were flying a hundred years ago for the first time, and then people were saying, ‘You know, why do we need a flying machine?’ And now we have a Boeing 747 and an Airbus.” Feringa shares this year’s prize with Jean-Pierre Sauvage and Fraser Stoddart for their work on nanomachines. Nanomachines are synthetic molecules that function as microscopic devices. Built in a laboratory, these molecules can be designed to respond to specific conditions, turning energy inputs into actions.

For instance, Feringa’s research team developed a nanomachine that resembles an automobile and can roll across a surface when stimulated with electricity.

“This is the start of a new molecular era,” nanosafety researcher Sara Snogerup Linse told the Nobel Prize social media team today. These tiny devices are not mere novelty: nanomachines have powerful implications for modern medicine. They can detect HIV, and they can even target and kill cancer cells.

These molecular devices have made it possible for scientists to develop new classes of smart materials that can heal, self-assemble and otherwise respond to environmental changes without human control. Imagine water pipes that could heal themselves after being damaged in an earthquake, or fabric that can instantly turn into casts for accident victims.

“I have won many prizes, but the Nobel Prize is something very special,” Sauvage told French television channel iTele this morning. “It’s the most prestigious prize, the one most scientists don’t even dare to dream of in their wildest dreams.”