Flying robots are adept aviators, flipping through small openings, building structures and playing tennis. But what goes up must come... 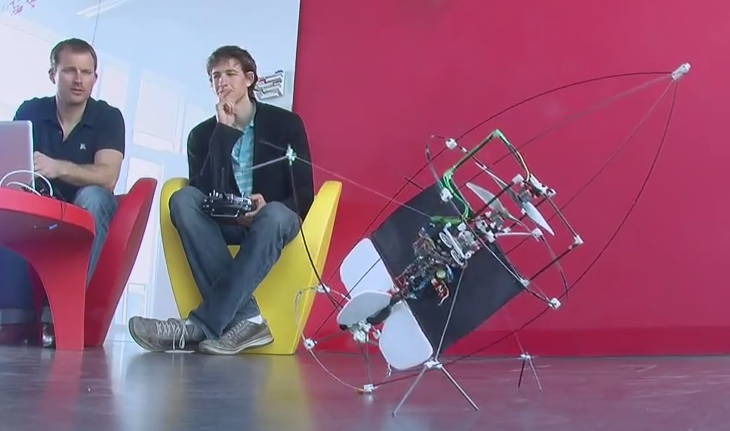 Flying robots are adept aviators, flipping through small openings, building structures and playing tennis. But what goes up must come down, and sometimes it’s not exactly as planned. A new flying robot can survive a crash, picking itself back up and taking flight again.

This robot is from the Swiss Federal Institute of Technology’s Laboratory for Intelligent Systems. It contains an active recovery system, which consists of four little legs that kick out to spring the robot upright. Then it can launch itself into the air.

For this to work, its rotors must be protected by a cage of some kind, so they don’t snap or bend when the robot crashes. But the cage also can’t interfere with the rotors, nor add excess weight or drag, throwing off carefully calibrated control systems. This carbon fiber design, resembling a bulbous squid scaffold, keeps the rotors safe and also provides a framework for the kicking legs. They fold up when it takes off.

This type of robot could be useful in exploring hard-to-reach or dangerous areas, like caves, collapsed mines or nuclear power plants, the researchers say. Research on the robot appears in the journal IEEE Explore.