Watch A 10-Story Building Go Up In Two Days

This building is the latest super-quick tower brought to you by prefabrication. 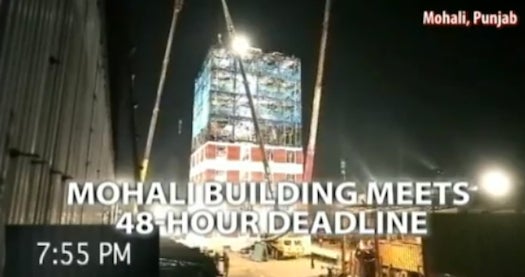 Prefabricated structures are getting lots of media attention right now, notably after China’s BroadGroup put up a 30-story pre-fab hotel in 15 days with plans to build the world’s tallest building in three months using the same technique. Now we have another entry in the taller-than-usual prefab building category: a 10-story building in Mohali, India, that was built in two days. TWO DAYS.

Entrepreneur Harpal Singh financed the construction of the building, known as Instacon, and enlisted more than 200 people for the project, which he told The Times Of India was the first of its kind in the country. Even more impressive: The building was approved for the highest-risk earthquake zone in the country, he claims.

For those of you unfamiliar with the prefab process, here’s a simplified version of how it works: big parts of a building called mods–parts of rooms and pieces of floors–are made whole in a factory, then added onto a steel skeleton. It’s Legos for the true professionals.

One thing to keep in mind: As impressive as this is, it’s misleading to say that it’s just a two-day project. Consider all the work not captured on video: It took a full two months to fabricate the pieces in a factory. And even after constructing the shell, the building isn’t done: there are still windows and other parts that need to be added on. As for cost, officials told The Times Of India, “The cost is almost the same as of conventional construction material. It saves a lot of time that goes into construction otherwise.”

But still. Watching the building be built is pretty neat.