The PopSci car test: Do performance and practicality really mix? We drive the new sport wagons. 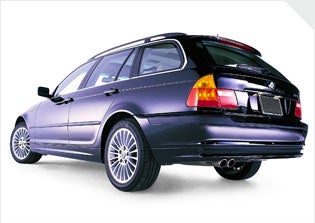 ALL-AROUND TALENT
The spacious BMW blends high performance and the lowest price in a pricey group.

If you haven’t noticed, station wagons are back. Actually, they’re more than back-they’re hot. It’s a no-brainer: You’re sick of low-mileage SUVs but used to all the square footage. You want something in between. You want a station wagon.

The four vehicles you see here, roomy takes on performance sedans, are just the beginning. A host of wagon concepts began making the auto show rounds this year as PR machines began churning out image-friendly monikers like “crossover vehicle” and “urban SUV.” We’d flatly refuse to give in to the hype, but for one thing: There’s barely a shred of old-wagon DNA in this group of so-called sport wagons.

To test the promised mix of utility and handling, we gathered the Audi A4 Avant Quattro, BMW 325ix, Lexus IS300 SportCross, and Mercedes C320 Sport Wagon. All but the BMW were new for 2002, but even the Bimmer received new features and styling tweaks. We packed the cars with occupants from across the spectrum: a 6-foot 7-inch man, pregnant woman, 6-year-old in a booster seat, 8-month-old in an infant car seat. We then carried this group across the country roads and rolling highways of Virginia’s Shenandoah Valley, mimicking a family day trip.

The BMW is the least expensive and least powerful, but it impressed our testers uniformly. The car embodies the precise handling and smooth power for which BMW is known, wrapping those features in a wagon body that offered the roomiest backseat and the second-largest cargo space in our test. Rectangular rear window frames don’t look particularly sleek, but aid loading and unloading.

The light-on-its-feet Lexus is the easiest to toss into corners. Kudos also for taking a chance on chronograph-styled instruments, which our testers loved or hated but definitely noticed. To run with this crowd, though, the Lexus does need some upgrades, as exemplified by the low-rent prop rod that holds up the hood, and the stadium-soft seats.

The Audi proved a love-it or hate-it proposition. Half liked it as much as the BMW, while the other half rated it last. The all-new A4 design significantly improves on its predecessor’s ergonomic shortcomings, but our tall man couldn’t get comfortable because of the center console.

Audi did miss some opportunities with its redesign when it failed to install rear windows that open completely, or grab-style door handles.

Finally, the Mercedes is the most luxurious of the group, and its ride and handling reflect this achievement. It’s big and comfy, but the other cars’ engines are in another league in terms of smoothness, and the automatic transmission is easily confused during sporty driving. But only the C320 has the three-pointed star on the hood, and that’s a serious consideration for many buyers.

The verdict: Manufacturers are on target with the sporting side of the equation, but fall a little short delivering old-wagon practical value. All are excellent cars, so there are no losers. We found fewer compromises in the BMW, and its lowest-price position sealed the deal.

The New Father
Sporty wagons for young families? Please. None of these vehicles has much more room than their sedan counterpart. If I had 40K to spend, I might buy a BMW. But not a BMW wagon.-Brian J. Fortner

The Expectant Mom
My job was to rate the best car for a budding family. My pick: the Mercedes, because it felt the most wagon-esque. But who wants to clean vomit off plush leather seats?-Robin M. LaSalle

The Single Guy
My colleagues are missing the point. These cars aren’t really for them. They’re not even purebred wagons. They’re hatchbacks. Really fast hatchbacks that can hold a couple of mountain bikes. What’s not to like?
–Michael Moyer

NOTE: 50 points out of 100 is the baseline score for the expected technology in this vehicle class.