It's two engines in one. Ford's dual-displacement engine runs on six cylinders for power, then switches to three for economy.

As you cruise down the freeway, your engine smoothly shifts into fuel-saving mode, temporarily shutting down half its cylinders. The adjustment is almost transparent. When you need power, a computer control reawakens those sleeping cylinders, again almost imperceptibly.

As we reported in 1977, automakers have long sought an engine that on occasion hoards power in return for fuel efficiency. In the scenario described above, however, the word that has proved most elusive for automotive engineers is smoothly.

Heralding the arrival of this “dual-displacement” technology, we reported that a Ford 300-cubic-inch, six-cylinder truck engine would be equipped with computer controls that would disable half of those cylinders under certain conditions to save fuel.

Today, the technology remains challenging and its promise largely unfulfilled. We spoke with Ford’s recently retired James R. Clarke, who was in charge of the original project. Clarke cited as key hurdles rudimentary computer controls, low power-to-weight ratios, and difficulties in controlling vibration when the engine switched to half power.

Ford is continuing to pursue the elusive goal, says Ford senior technical specialist Chinu Bhavsar. Computer controls are more sophisticated, he says, and new “active engine mounting” is smoothing out the vibration difficulties. Noise-control technology is doing the same with exhaust noise. Ford isn’t ready to say when we’ll see dual-displacement in a production vehicle, only that it will be soon.

Among other carmakers, General Motors is planning to begin equipping large trucks and sport-utility vehicles with displacement-on-demand engines by 2004.

The idea isn’t new. An engine of this type first went into production in 1915, installed in the Schebler car. In 1917, the Enger “twin unit twelve” featured a two-displacement V12 that could be operated by a lever on the instrument panel. Since then, a number of copies have been made. But none has been successful.

Until now. The Ford Motor Company believes it has the right combination to make the idea work, And, according to present plans, Ford will have the engine in production within 24 months.

Called a technological breakthrough by Ford President Lee A. Iacocca, the dual-displacement engine will improve fuel economy by 10 percent. And that’s just the beginning. Later, with more precise tuning of the system, economy can be increased to twice that and more, depending on driving conditions.

The first engine to be converted will be Ford’s 300-cubic-inch six, which is standard in vans and light trucks. Dual-displacement engines for the family car will come later.

During most driving, the engine runs on six cylinders and delivers normal power. But when all engine functions meet a certain level — usually at cruise speeds greater than 45 mph — the engine switches to three cylinders.

The heart of the system, according to Iacocca, is an electronic module that controls switching from six-cylinder operation to three- and back again. The module is about the size of a cigar box and fits under the hood, close to the engine. It has 68 discreet components and uses five integrated circuits. The module has a logic system that’s preprogrammed to do just one job — give the signal to switch engine modes.

On the engine itself, all changes take place within the valve cover. The complete mechanical system for switching each cylinder is small enough to fit in your hand and weighs about a pound. The switching unit consists of a solenoid and a valve bypass located on top of each of the front three cylinders.

During six-cylinder operation, this mechanism lets all valves operate just as they would in a conventional engine. Meanwhile, the electronic control module constantly monitors engine functions. When five critical conditions are met (water temperature greater than 180 degrees, transmission — automatic or manual — in third gear, intake-manifold vacuum above 9 inches of mercury, throttle angle less than 55 degrees, and vehicle speed above 45 mph), the computer actuates the solenoid. That closes the valve to three cylinders, effectively sealing them. They take in no air-fuel mixture and exhaust no gases. (This mechanical system was developed in cooperation with the Eaton Corp.)

The trapped air inside the closed cylinders has no effect on the power or emissions of the engine. It acts like an air spring, simply compressing and expanding as the piston moves up and down. The absence of compression braking in these cylinders contributes to (a freewheeling effect.) Only compression from the three working cylinders is available to act as resistance during deceleration.

“Drivers will notice this loss,” said James R. Clarke, Ford’s man in charge of the project. “But,” he noted, “it’s like the period when drivers were switching from manual to automatic transmissions. The coasting effect of the automatics was a sharp contrast to the slowing effect of the manual transmission.” 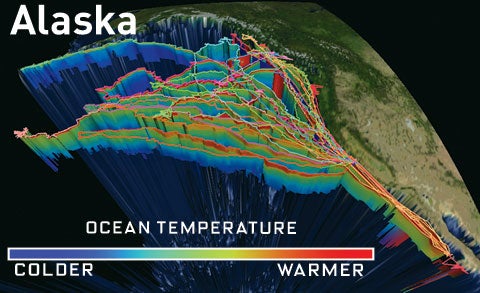 Meet the newest ocean sensors: elephant seals. These zigzags represent the migration patterns of 11 females between Baja California and the Gulf of Alaska. iPod-size satellite tags glued to their heads recorded the depth, temperature and salinity of the water they swam through and then relayed the data to researchers. The Tagging of Pacific Pelagics initiative, a program of the Census of Marine Life, plans to outfit 23 marine species, including bluefin tuna and white sharks, with 6,000 tags by 2010. One surprising finding so far: A weird warming of California coastal waters in 2005 forced tagged sea lions to venture offshore up to 300 miles in search of food. 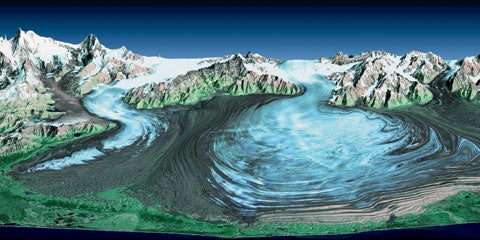 The frozen lobe of the behemoth Malaspina glacier wrinkles as the faster-moving valley glaciers behind it push it toward the Gulf of Alaska. To create this accurate 3-D view, NASA scientists draped a satellite image over detailed topographical data acquired during a flyover of the space shuttle Endeavour in 2000. The project was the first to map the elevation of ice masses in high resolution around the world, providing scientists with baseline measurements with which to gauge future changes. The shallow end of this Rhode Islandâ€size glacier is melting swiftly. Glaciologists have determined that areas of the glacial lobe were 98 feet lower in 2004 than they were in 2000. That’s double the rate of pre-1999 thinning. 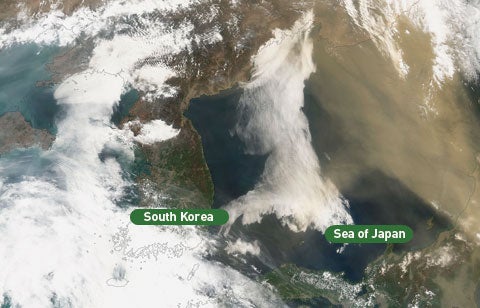 NASA’s Aqua satellite imaged this brown shadow of dust, soot, smog and other pollutants floating on the prevailing winds over the Sea of Japan in 2005. Such plumes are lofted into the sky by sandstorms in the Gobi Desert, pick up industrial emissions over China’s megacities, and disperse across thousands of miles of the Pacific Ocean, all in a matter of days. The uppermost cloud layers can travel as far as the Atlantic Ocean. Scientists are still unsure how much of the dusty soot settles into the lungs of North Americans. But they do know that the particles block sunlight and change regional temperature and precipitation patterns, which can mask global warming and modify storm tracks. 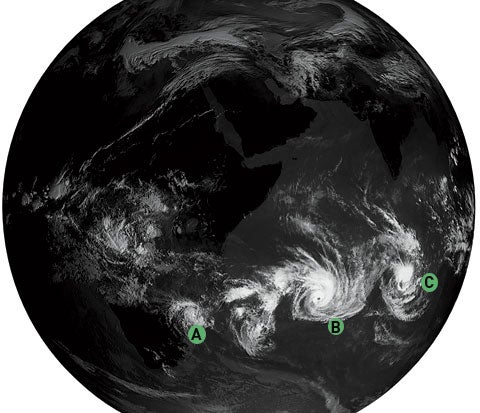 It’s Cold at the TopIf the world is getting stormier, these satellites could show it

You’re seeing the frigid tops of Earth’s clouds captured in a single moment in February, the height of the Pacific cyclone season. Cyclones Favio [A], Gamede [B] and Humba [C] spin toward Africa. This seamless mosaic, developed by NOAA’s Climate Prediction Center, stitches together strips of data from five weather satellites. Their sensors measure infrared radiation (heat) in the atmosphere, so the colder the cloud, the whiter its trace. The ghostly shapes of continents appear dark because the sun warms landmasses in the daytime. The data set, which is captured every half-hour, is the first to deliver a whole-Earth, near-real-time view of how storm systems evolve. 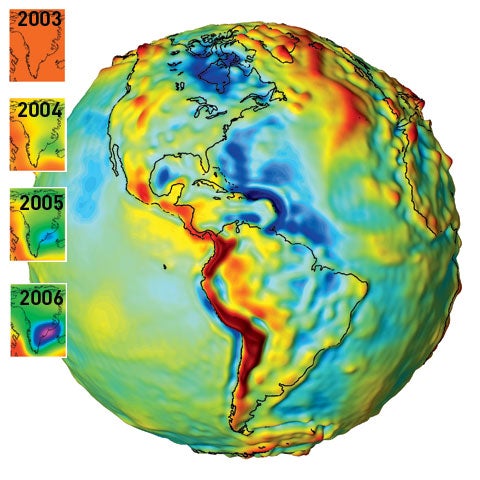 Forget what you learned in high school: The pull of Earth’s gravity is not 9.81 meters per second squared everywhere. For proof, look no further than this global gravity map, which shows where Earth’s gravitational force is stronger or weaker. Red indicates areas of high mass-often mountain chains-that exert extra gravitational pull. This image is based on data captured by the twin satellites of NASA’s Gravity Recovery and Climate Experiment, or GRACE, from 2003 to 2006. The satellites measure the gravity of the entire planet every 30 days. Because GRACE detects mass, it can track where ice accumulates and melts on Earth’s crust, providing a critical gauge of global warming. For instance, it has enabled scientists to quantify the dramatic loss of ice in the southeast of Greenland since 2003. If all of Greenland’s ice were to melt, global sea levels could rise by 23 feet, submerging Florida’s lower third, among other coastal areas. ON THIN ICE: Greenland´s ice melt (left) shows up as a loss of mass [blue and purple] in these gravity maps. 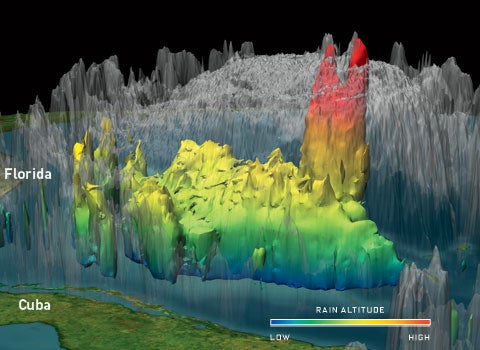 You’re looking at thunderclouds, 11 miles tall, brewing inside Hurricane Rita as the storm scrapes past Cuba in September 2005. This image was created using data captured by NASA’s Tropical Rainfall Measuring Mission (TRMM) satellite, the only space-based instrument that can measure where and how much rain forms deep inside a hurricane. The thunderclouds, known as “hot towers,” serve as a yardstick of a hurricane’s latent heat. The red shows where rain is at its highest altitude. Since water vapor releases heat as it condenses, taller, rainier clouds can mean more powerful hurricanes. Pinpointing such hot towers enables scientists to make more precise predictions about whether a young storm will intensify or fizzle. A case in point: Hurricane Rita spiraled into a category-4 monster 48 hours after the radar satellite captured this data. Such predictions weren’t possible before TRMM, because ground-based instruments lack the accuracy and range to do the job. If funding permits, NASA’s successor program, the Global Precipitation Measurement Mission, is set to orbit in 2013. Its wider view and superior resolution will further improve early-warning systems for storms. 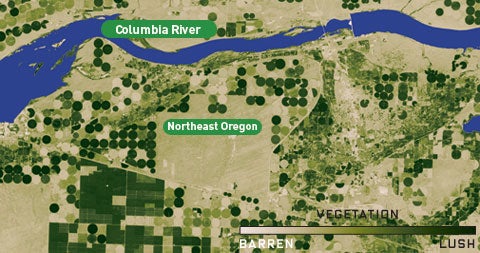 Lush, unnaturally symmetric fields of wheat, potatoes, poplars and other crops dot parched northeast Oregon in this image taken last August by NASA’s Terra satellite. A high-resolution sensor on the satellite gauges plant photosynthesis, which is scaled to color here: The darker the green, the denser the vegetation. Plant growth, or lack thereof, is a key indicator of drought. The circular shapes result from pivot irrigation systems-outsize lawn sprinklers-that pull water from the Columbia River. _Terra _ ‘s data can also be used to make fast, accurate maps of how much water is consumed by individual fields to help manage water supplies. Given the agricultural and consumer demands on the Columbia River, the U.S. Department of the Interior predicts that there is “substantial” potential for a water crisis by 2025, when demand would outpace supply. You can also see this image on our [Google Earth Layer
Vehicles
Cars
ford
Looking Back