“These Cars Are Tight”

Hot new car segment, meet your intended buyer. We'll be over here with a dictionary. 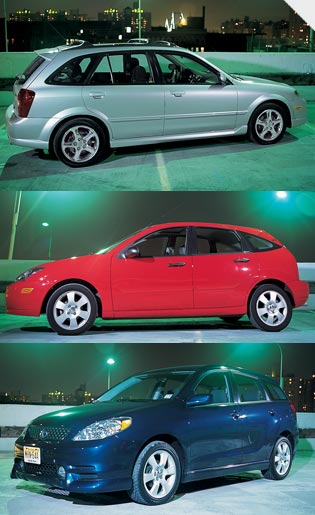 MAZDA PROTEGÉ5 (top)
It looks conventional, but Mazda squeezes gobs of zoom zoom from its small engine. FORD FOCUS ZX5 (middle)
Some in our student focus group thought it was a looker, but more were put off by its unusual design. TOYOTA MATRIX XRS (bottom)
With edgy styling, a 180-horsepower engine, and a six-speed manual, the Matrix took best-in-class honors.

You don’t have to have a navel ring to be an automotive designer these days, but it helps. Take the three cars you see here-Ford Focus ZX5, Mazda Proteg5, and Toyota Matrix XRS. They’re the first entries in what automakers are calling the Next Big Thing, a segment aimed directly at 22-year-olds with ankle tattoos.

To see what the intended audience thinks, we drove the trio on a 260-mile route that pit-stopped in the middle of the University of Connecticut campus in Storrs. There, we learned all three are “dope” and definitely “tight.”

The key ingredients in this growing category are outta-here styling, fold-down backseats that clear the deck for snowboards, surfboards, and mountain bikes, and prices that leave cash in the checking account for textbooks. In 130-horsepower form, the Toyota, Ford, and Mazda begin at $14,670, $15,615, and $16,385 respectively-the upmarket 180-hp Matrix XRS tester starts at $18,750.

The Mazda is technically a compact car, and the others midsize, but their dimensions and basic 130-hp form are similar. Even so, they exhibit enormous differences in character. The Proteg5 is the middle-of-the-roader, which isn’t necessarily bad. Our student critics preferred its clean, integrated look to the Focus’s, despite calling it, harrumph, “a station wagon.” The Mazda’s dashboard has showy black-on-white gauges and a conventional layout, and cloth upholstery for the best of reasons-leather isn’t available. The Proteg5’s mild predictability won some students, but it will win young parents as well.

Ford’s Focus ZX5 smites the eye with edgy styling. Inside, its dash is all asymmetrical clamshell shapes and weird tilted eyebrows. We thought the students would like its unconventionality, but it scored third best. Its Zetec 2.0-liter is an enthusiastic four-cylinder engine with a no-nonsense growl. Its 130 hp arrives at 5,500 rpm, compared to the slightly less vigorous Mazda’s 6,000 rpm. Despite the Focus’s elbows-out styling, the student body thought it uncomfortably close to an econocar for mom.

Admittedly, the brand-new Matrix XRS (and sibling, the Pontiac Vibe) is a wild card. Its red-hot 1.8-liter four-cylinder, combined with a standard six-speed manual, delivers 180 hp at a sky-high 8,200 rpm-a road rocket. This extraordinary power is thanks to variable cam timing and variable valve lift, an unheard-of combination at this price. Sleek styling inside and out earned it the highest grades from our student focus group. In addition, the Matrix sets a new standard for space efficiency. The Mazda and Ford backseats fold almost all the way down, but the Matrix backseats fold flat-and the right frontseat folds down too, for even more room. It all adds up to 118 cubic feet of volume, 25 percent more than either the Proteg5 or Focus.

Automakers are constantly seeking ways to bring young buyers into the fold, and these five-doors are today’s hottest youth-seeking missiles. They deliver cubic yards of room, lively performance, and excellent fuel economy. And if you’re going to the snow, the Matrix even has available all-wheel drive. Now that’s dope.