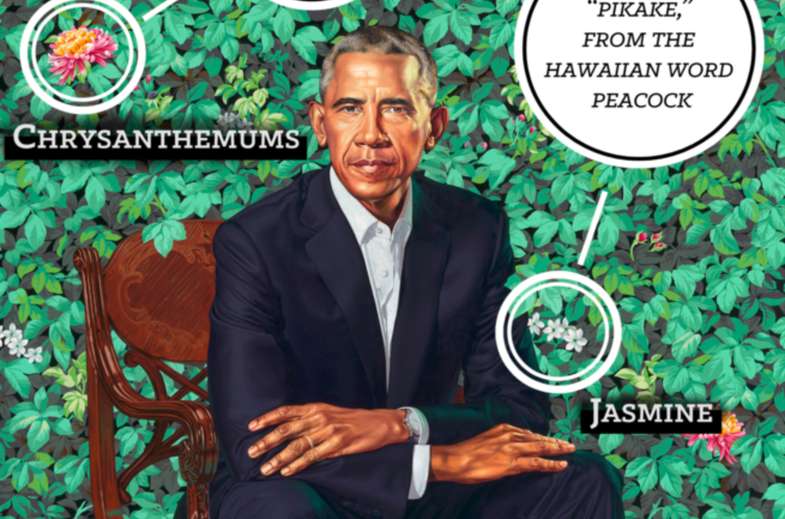 The National Portrait Gallery in Washington, D.C. is full of familiar faces. Since it opened in 1968, the museum’s sole purpose has been to showcase the images of “men and women who have made significant contributions to the history, development, and culture of the people of the United States.” A visitor could wander the halls for hours, but there’s now more reason to high-tail it to the Presidential Gallery. As of February 12, former President Barack Obama’s portrait has been added to the hall, and with it some truly beautiful botanicals.

Painted by pattern-loving portraitist Kehinde Wiley, the piece features Obama seated in front of a fortress of leaves. From this deep green background emerges three types of flowers, each representing a part of the former president’s history. The white flowers are jasmine, representing Obama’s birthplace and childhood in Hawaii. The pink and gold flowers are chrysanthemums, the official flower of Chicago, where Obama became a community organizer and, ultimately, a senator of Illinois. And the purple flowers are African blue lilies, a reminder of his father, Barack Obama, Sr., a Kenyan man.

While you could take the flowers at face value—they’re almost so beautiful they don’t need an explanation—Marc Hachadourian of the New York Botanical Garden says you’d be selling yourself short. “There’s a great language of flowers,” he says. While we might not all use the same word for “love,” we know that roses are the go-to Valentine’s Day botanical. The same is true for white flowers as symbols of purity and certain spookier plants are unspoken symbols of death and decay.

The language of flowers goes back centuries. During the War of the Roses in the 1400s, one side was represented by the red rose, the other by white. In painting, flowers featured in still life art were representative of life and death. In portraiture, specific flowers could be used as emblems to represent the subject’s caricature. But flower language reached its zenith under the prudish reign of Queen Victoria. “Many of these are linked to a time in Victorian history when flowers were used as a hidden or silent form of communication—almost as sort of a living code,” Hachadourian says. When lovers couldn’t speak directly, flowers took the place of words. “You could send a bouquet to someone and … [deliver] your message through the code of the flowers themselves.”

In a portrait, a person’s physical form is usually asked to speak for itself. A smirk or a pose is all an artist typically has to work with. But by employing botanical illusions, Wiley added a narrative to his visual. “For the artist to include these in the presidential portrait is conveying something that’s deeper than just the individual,” Hachadourian says.

The blooming vine Jasminum sambac, which is native to the Himalayan region but has spread into paradisal towns the world over, was a favorite of the Hawaiian Princess Ka’iulani. The fragrant flower is called “pikake,” from the Hawaiian word peacock (presumably for the way its petals fan in a circle), and its white buds are still used in making leis, exactly like the one Obama wore to prom back in 1979.

The fluffy chrysanthemums, meanwhile, represent Obama’s decades-long relationship with the city of Chicago. In 1966, Mayor Richard J. Daley designated the chrysanthemum as the city’s official flower. While Daley’s interest in this particular plant is unclear, botanists the world over are fond of the flower’s seemingly infinite uses. Not only is it beautiful in a bouquet, it can also be turned into tea or serve as a natural insecticide.

The African blue lilies, meanwhile, hint at a story that goes back much longer than Barack Obama himself. Also called the Lily of the Nile, the Agapanthus isn’t a lily at all—and it isn’t native to the Nile. Rather, the flower is native to South Africa, Lesotho, Swaziland, and Mozambique, and its taxonomic classification remains disputed to this day. Despite the botanical’s confused story, it’s an important symbol of Obama’s paternal heritage and a reminder of the thing that sets him apart from the rest of the men in the Hall of Presidents.

The portrait’s beauty is, of course, in the eye of the beholder. But Wiley’s use of bold, bright botanicals is sure to attract attention for years to come. “Man’s relationship with plants has always been very important,” Hachadourian says. “It offers food, shelter, medicine, and then from there, it’s about the beauty of the plants themselves.”