The Women Who Removed Birds From People’s Hats

A feather in a woman’s hair, or on a hat, might not turn heads today. But a whole dead bird... 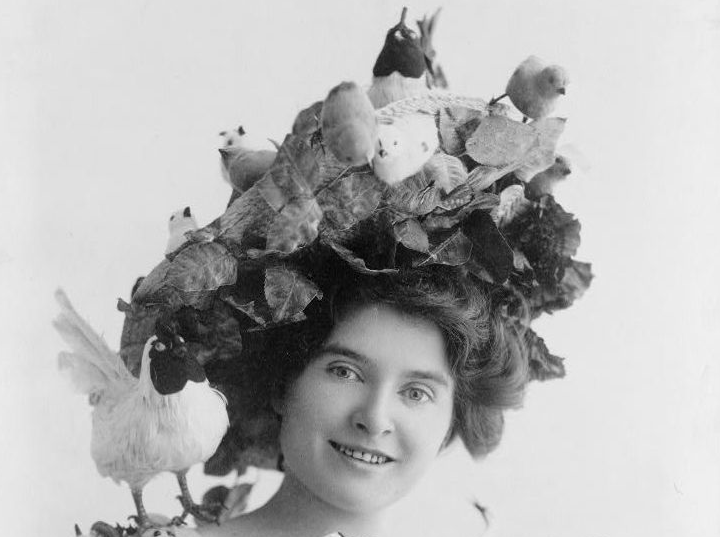 A feather in a woman’s hair, or on a hat, might not turn heads today. But a whole dead bird pinned to somebody’s head probably would. Not so 150 years ago, when wearable taxidermy was fashionable. In fact, birds on hats were so popular that they contributed to the decline of several species like the snowy egret and the common tern. It wasn’t until one particularly driven group of women took a stand that all this changed.

Between around 1875 and the early 1900s, hunters killed hundreds of thousands of snowy egrets, owls, terns and other elegant birds to near extinction, but the species that suffered the most during this period of mass decimation was the passenger pigeon. Not nearly as resplendent as these other birds, the passenger pigeon — hunted mostly for food, but also for its tail feathers — flew in flocks dozens of miles wide, making them especially easy to net and shoot down. Massive flocks that had once taken hours to pass overhead shrank dramatically through the end of the 1800s, until the last passenger pigeon died in captivity on Sept. 1, 1914, a century ago this year.

Today, we understand that even when an animal seems abundant, our efforts to kill it for food or fashion can impact an entire species. But in the early 1900s, people didn’t believe they could put a dent in an animal’s population. The 17th century extinction of the dodo bird did serve as a cautionary tale, but the passenger pigeon and other species seemed more abundant, even inexhaustible. “That was the prevailing attitude: It’s okay, we can do this. This is an exploitable resource that we can take,” says Wayne Petersen, director of Important Bird Areas at Massachusetts Audubon.

The haze did clear for one prominent Boston socialite named Harriet Hemenway, who became overwhelmed by descriptions of the bird hunts. Frank Chapman, a famous ornithologist and field guide writer at the time, described heron massacres, in which, “Mercilessly they were shot down at their roosts or nesting grounds, the coveted feathers are stripped from their backs, the carcasses are left to rot, while the young in the nest above are starving.”

Hemenway and hat-wearing Victorian women were scandalized by this when they considered the practice through the lens of what they thought was proper for people, says Jennifer Price, a historian at Princeton University. Eventually, Hemenway and her cousin, Minna Hall, rallied together other female socialites of Boston to boycott the feather trade, ultimately gathering support of about 900 women.

In 1896, Hemenway and Hall joined forces with prominent ornithologist William Brewster and launched the Massachusetts Audubon Society, with their official mission, in part, to “awaken the community to the fact that this fashion of wearing feathers means the cruel slaughter of myriads of birds.” This new organization was the first state-run Audubon Society, and helped lay the groundwork for the National Audubon Society, which still works to protect birds and other wildlife today.

News of the feather boycott rippled through Boston, and finally helped push for a state law that prohibited the wild bird feather trade in Massachusetts in 1897. Hat makers and others involved in the trade called members of the Audubon Society “extremists” and “self-righteous sentimentalists.” Politicians argued that thousands of jobs would be lost if the feather trade ended nationally.

But on the heels of their victory, the group persevered. They pushed for the very first federal conservation legislation in the U.S. in 1900, called the Lacey Act, to limit the killing and sale of plants and wildlife across state lines. “It was enormously important,” says Price. “And there is no question that it is an outgrowth of the grassroots pressure from the Audubon Society.”

There were still stubborn naysayers, of course. Missouri Senator James Reed, for example, asked during a 1913 congressional debate, “Why there should be any sympathy or sentiment about a long-legged, long-beaked, long-necked bird that lives in swamps and eats tadpoles.”

But the extinction of the passenger pigeon in 1914 did serve as a final kick to the shins of those who denied that human action could obliterate a species. The birds had already suffered significantly by the time the Lacey Act passed, and were not able to rebound after such heavy decimation.

Later, the Migratory Bird Treaty Act — inspired by, but too late to save the passenger pigeon — passed in 1918 to limit hunting birds without a permit, in the growing government effort to take responsibility of protecting wildlife. The Endangered Species Act of 1973 stemmed from this new snowballing conservation movement.

Now well-established, the modern conservation movement has many forgotten roots in this strange episode in which women shivered at the sight of dead birds on hats and led a crusade to remind humans that we do, indeed, have the power to punch a dent in species and the environment.