No matter where you live, there’s probably some pest that you can’t stand. Subway rats are the pinnacle of filth... 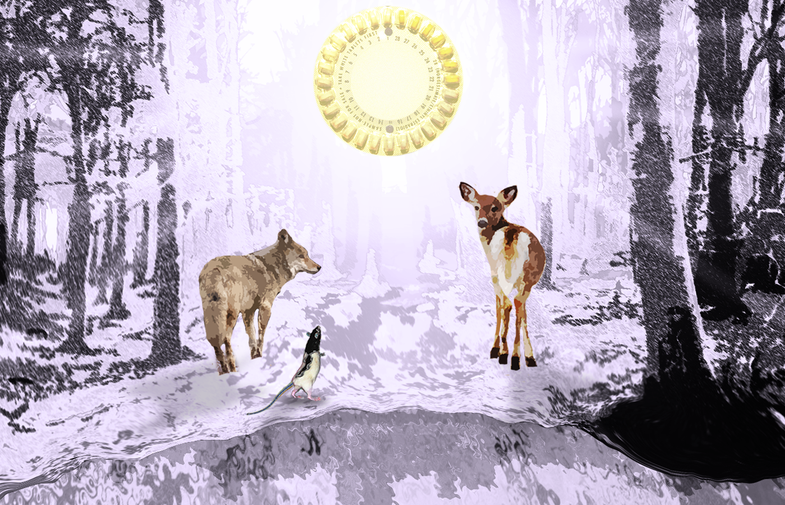 No matter where you live, there’s probably some pest that you can’t stand. Subway rats are the pinnacle of filth to city dwellers, while white-tailed deer are the scourge of suburban gardens and roads. The coyotes that threaten, and sometimes kill, livestock and pets are loathed out in the country. For centuries, humans have dealt with these pests by killing them, but some are trying a new approach: using birth control rather than bullets. In pilot programs around the United States, people are turning to drugs to control populations of everything from deer to rats to coyotes. Take recent attempts to control deer populations. On the East Coast of the United States, animal control researchers are injecting female deer with an immunocontraceptive called porcine zona pellucida (PZP), a drug made from proteins found in pig ovaries. Immunocontraceptives cause the body to produce antibodies against hormones or proteins necessary for reproduction, thereby preventing pregnancy. PZP is an attractive option to organizations like the Humane Society because the drug has been studied by researchers for its effects on deer and horses for over thirty years now, and has limited side effects.

But how do you actually give birth control to an animal? You can’t expect them to take a pill every day at the same time. To administer PZP, animal control specialists use a dart gun. First they track the deer, and then they shoot them with a dart to administer the dose. The whole process takes over an hour for each deer, though the initial application takes as long as seven hours and requires workers to capture, tranquilize, and tag the deer to identify it for future doses. Each dose lasts for about two years, at which point the animal has to be relocated and re-darted. Typically, the average deer only lives for two years anyway, and the longest they can live is ten, so animal control specialists only have to medicate female deer between one and five times in the animals’ lives.

So far, this method has been tried in a handful of places in the United States. In one study, deer in a population isolated on Fire Island (off the coast of Long Island) were darted with PZP and followed for ten years. The study began in 1993, and by the time it ended in 2006, the deer population had dropped to just 42 percent of its peak size; somewhere between 500 and 700 deer. On Fripp Island, in South Carolina, a similar program resulted in the deer population being cut in half. But The National Park Service says that, “while many people feel that the fertility control project was successful, this was only conducted as research, and not as a component of an approved management plan.” In other words, while the Fripp Island project provided evidence that darting deer could do the job, the method hasn’t been accepted as an official population control method yet.

One reason that other places haven’t jumped on the PZP bandwagon is that Fire and Fripp Islands have a very particular advantage: they are home to isolated populations—the deer are stuck there and can’t leave. That makes it easier for researchers to keep track of exactly how many animals they’re dealing with, without worrying that a few does from the next town over will wander in and mess up their numbers. Now, the town of Hastings-on-Hudson in New York is starting a program to see if PZP-based contraceptives could potentially reduce the deer population in an open environment. If the Hastings-on-Hudson experiment works, other towns might become inspired to try contraception too, rather than the more controversial deer culls.

Meanwhile, just south of Hastings-on-Hudson, New York City is tackling a smaller, more difficult pest: rats. Rats pose a unique set of challenges to birth control methods. Unlike deer, which can be tagged and re-injected with a fresh dose of contraception every few years, the sheer number of rats in New York City makes it impossible to catch and drug each rodent, individually. They breed much faster, too. While a doe might give birth to one to three fawns a year, a female rat can produce up to 84 young during that same time period.

Currently, the city’s rat population is controlled by poison, which can pose a problem to pets, children, and birds of prey. So a new project is looking at a way to create an more appetizing option: edible birth control. The drugs they’re using would sterilize the rats permanently, without killing them or impacting their predators. Arizona-based Senestech, the company running the experiments that target subway rats, has been working with a combination of chemicals that act to shut down a rat’s ovaries. The initial laboratory research found that even very small doses led to a significant reduction of ovarian follicles in the rats.

Great, but why should the burden of birth control be focused on the female of the species? In some rare cases, it isn’t. Coyotes are one of the few animal populations where researchers have focused their birth control attempts on males, rather than females. Work done by Marjorie MacGregor at the University of Wyoming shows that by injecting male coyotes with a substance called deslorelin, researchers can prevent them from producing sperm. Initial data from the project shows that the drug can prevent sperm production in coyotes for a whole year. However, like they do in the deer contraception plans, researchers would have to inject coyotes with the drug repeatedly if they wanted to maintain sterility.

Many of these studies are still in the early stages, and there are plenty of logistical hurdles before pest birth control becomes a reality, from skeptical and slow moving bureaucracies to the sometimes high financial cost of such programs, which can cost hundreds of dollars per animal treated. That said, soon, we might be able to limit the number of nuisances without killing them, allowing both humans and animals some valuable breathing room.

This is part one in our three part series investigating how contraception is being used on animals all around the world.