Bounce With Me, I’ll Help You Out

Swaying in church or head-nodding at a concert, we humans like to move together – and it’s probably part of... 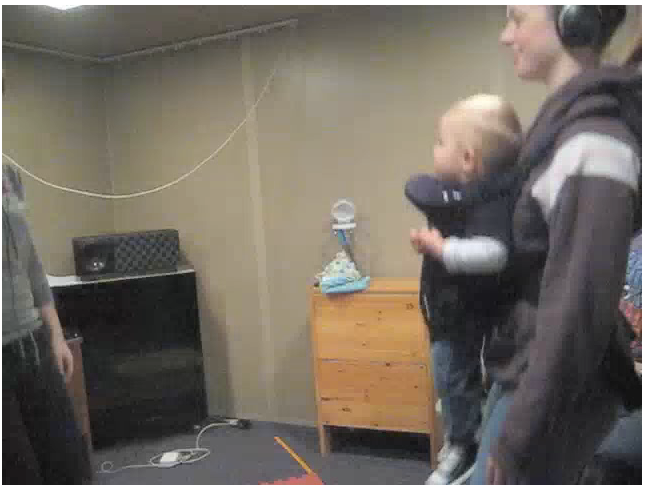 Swaying in church or head-nodding at a concert, we humans like to move together – and it’s probably part of our deep group association behavior. Now, researchers have shown that babies as young as 14 months are more likely to help out someone with whom they’ve bounced to a beat.

In a series of adorable experiments researchers at McMaster University in Ontario, Canada either bounced in sync with babies, who were in a forward-facing carrier, or moved faster or slower out of sync with the rhythm. They bounced with 68 babies in all.

After 2.5 minutes of bouncing, the experimenters needed the babies’ help finishing a task – either hanging up clothes, drawing a picture or putting balls in a bucket. While babies who had been bounced out of sync with the researcher only picked up and handed back 30 per cent of the dropped objects, in-sync babies came to the researcher’s aid 50 per cent of the time. The in-sync babies also responded more quicklyt, as reported in Developmental Science this month.

Laura Cirelli, a graduate student in the lab of Laurel Trainor at McMaster University, says that dance is a uniquely human phenomenon, and could have helped our ancestors form bonds as a group. “We’re the only animals who dance – other than a few documented cases of birds displaying dancing behavior,” she says. In studies of adults, researchers have found that when you tap in rhythm with another person, you’re more likely to find them likeable.

Music may prime people to be home helpful towards each other – and that has big benefits for societies. Cirelli points out that in humanity’s deep past, music was never a solo activity: in order to make it, people had to come together (although today, iPods have changed all that. She wonders if music behaviors were adaptive “Maybe groups who had music were more able to survive than those who didn’t,” says Cirelli.

Next up, the researchers hope to find out how far the post-dance-party altruism goes. After bouncing in sync with someone, would the babies be more likely to help out someone other their dance partner? “If this theory is that music makes us work better together, it shouldn’t with just anyone – it should work with that specific partner,” says Cirelli.